The EUV wave occurred in NOAA AR 12661 on 2017 June 1. In the composite images (Fig.1(a)-(b)) of Large Angle and Spectrometric Coronagraph (LASCO) C2 and Atmospheric Imaging Assembly (AIA) 193 Å, AR 12661 is situated near the north leg of a bright steamer belt, and the streamer-like structure on the north connected with the overlying streamer chains (Fig.1(a)). Due to the perturbation of the CME, the streamer chains became very bright (Fig.1(b)). In the light curve of cusp region in 94 Å of the flare region, the flare impulsive phase started at ~01:39 UT, and peaked at ~01:51 UT (dotted vertical lines in Fig.1(c)). The radio spectrum of Yunnan Astronomical Observatories (YNAO) and Learmonth (LEAR) shows well the related type II radio burst that indicates the formation of a coronal shock, and two strong stripes are correspond to the fundamental (F) and harmonic (H) branches (Fig.1(d)). The burst was initiated at ~01:43:30 UT, and F and H branches almost disappeared at ~01:45 and ~01:48 UT, respectively. Assuming an initial shock speed of 1500 km/s, we calculated the fitting curves of F and H branches by using the one-fold (red solid), three-fold (red dashed), and five-fold (red dotted) Newkirk coronal density models, respectively. It is obvious that the curves of the one-fold Newkirk model fit best with the radio burst. On the other hand, the deduced start height (1.18 Rsun) for the one-fold Newkirk model is also consistent with that of the CME front at the same time. Furthermore, ~2 minutes after the disappearance of the H branch, another type II radio burst appeared at ~90 MHz, and slowly drifted to ~60 MHz till ~01:55 UT (the yellow box in Fig.1(d)). It is likely a result of an interaction between the coronal shock and the streamer(-like) structure (Feng et al. 2013; Kong et al. 2012). 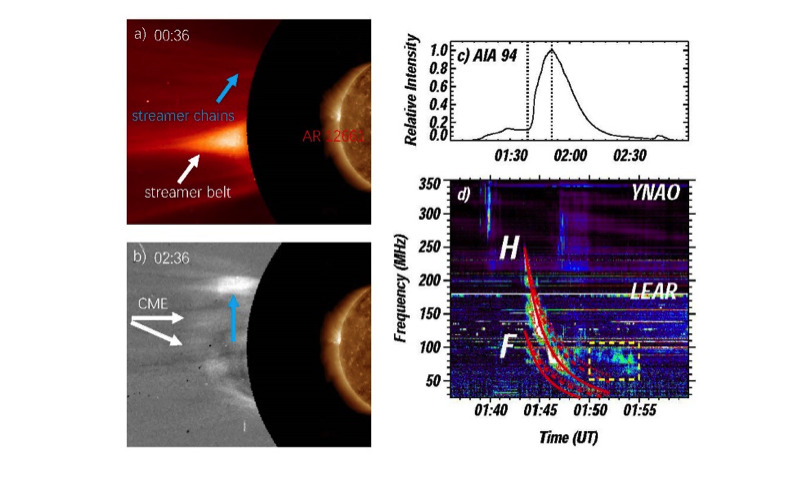 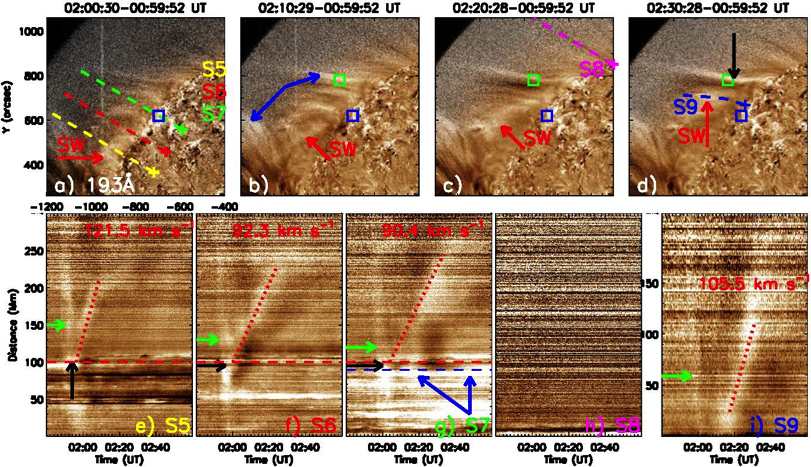 In this EUV wave event, the interaction between the EUV wave and a streamer-like structure triggered some upward SWs, and the interaction is also confirmed by the sudden change of the radio spectrum (the yellow box in Fig.1(d)). It is suggested that the fast-mode MHD wave can be partly trapped inside magnetic loops rooting at magnetic quasi-separatrix layers (Chen et al. 2016; Zong and Dai 2017). The lower start position (1.18 Rsun) of the shock can release trapped waves in the lower corona, and the speed (~80 km/s) of upward SWs is in the speed range of slow-mode waves. Hence, we propose that the upward SWs likely originated from the partially trapped fast-mode EUV wave, and were possibly activated by the strong compression of the shock wave in the form of slow-mode.