Fast magnetoacoustic wave trains are a promising seismological probe of the corona, revealing the magnetic connectivity and providing the estimation of the absolute value of the coronal magnetic field. Low-frequency radio observations allow for the detection of fast wave trains in middle and upper corona, above the field-of-view of EUV imagers and spectrographs, via the modulation of the radio emission by the variations of the electron concentration.

We present the first identification of a quasi-periodic fast magnetoacoustic wave train propagating in the middle corona, in the fine structure of a metric type III radio burst (see Figure 1). Such a direct association of the observed quasi-periodic striation in the type III emission with a specific MHD wave is conducted for the first time is this work. 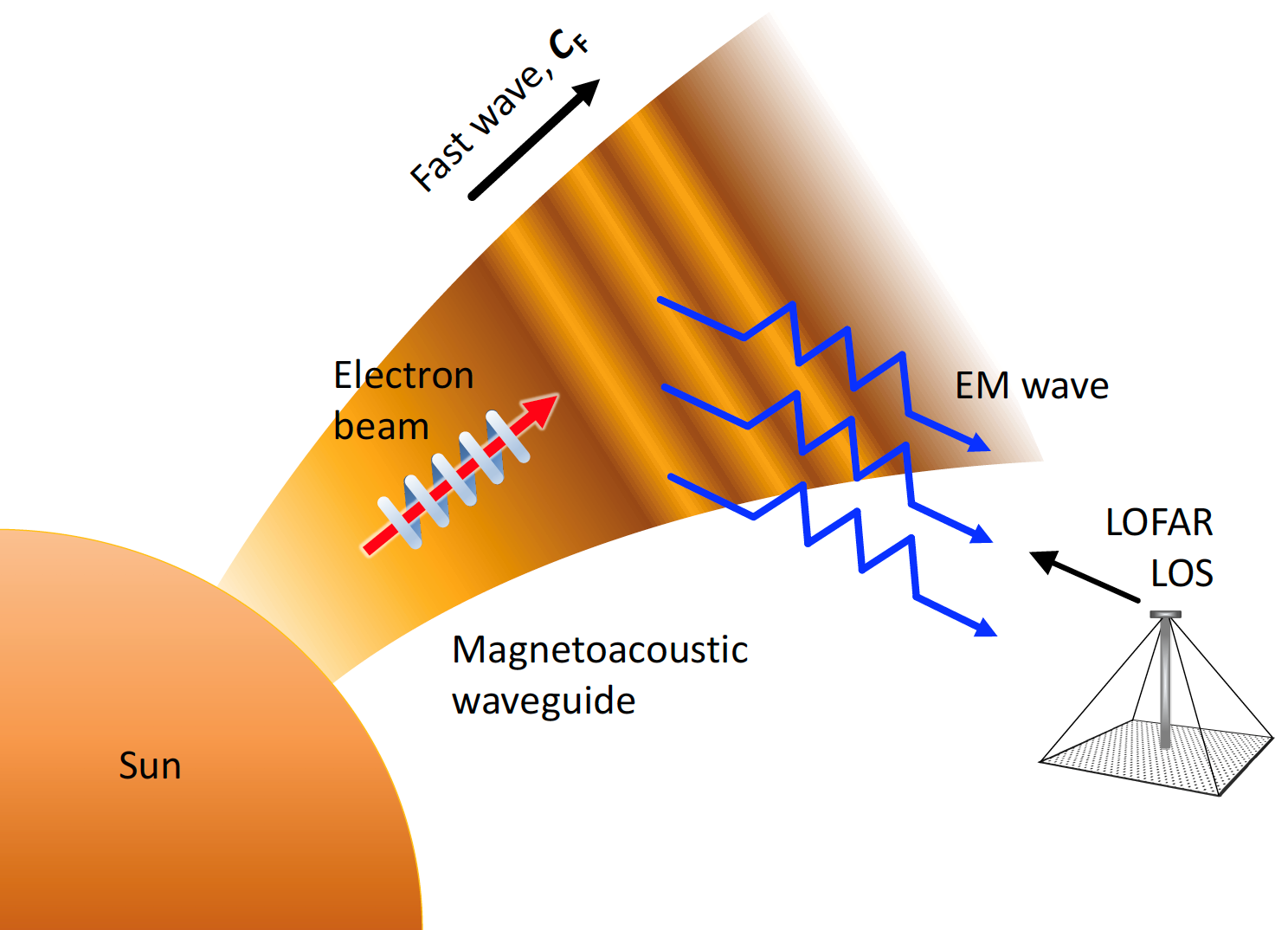 Figure 1. A schematic synopsis illustrating a qualitative scenario of the generation of quasi-periodic striation in a dynamic spectrum of the type III burst by a propagating fast magnetoacoustic wave train.

The analysed burst was observed with LOFAR (van Haarlem et al. 2013), see CESRA nugget by Kontar et al. for a detailed discussion of this event. The dynamic spectrum of the burst has a fine structure represented by slowly drifting quasi-periodic striae (Figure 2, left-hand panel), which indicates that the electron beam producing the burst propagates upwards through the coronal plasma modified by a travelling compressive wave whose phase speed is much lower than that of the beam. 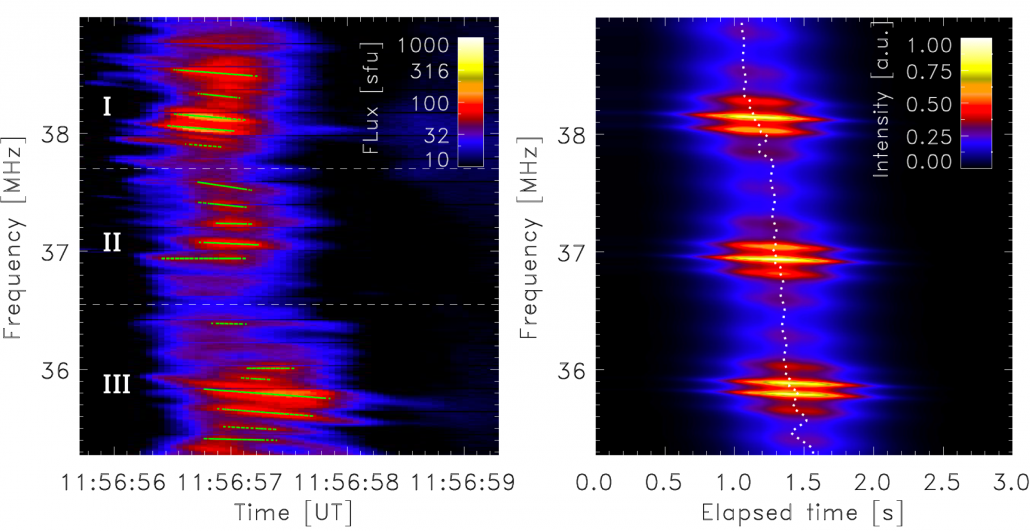 Figure 2. Left: Fragment of a type III solar radio burst occurred on 2015 April 16, and observed by LOFAR. The straight green lines show fitting of the observed striae by linear functions. The regions of apparent clustering of the striae into three distinct groups are indicated as “I”, “II”, and “III”, and separated by the horizontal dashed lines. Right: Modelled burst produced by the mechanism shown in Figures 1 and 3. The white dotted line shows the instants of time of the maximum radio flux at each observational frequency.

Analysis of the dynamic spectrum reveals the presence of two quasi-oscillatory components between approximately 35 MHz and 39 MHz (that is 1.6 R¤ to 1.7 R¤ assuming the Newkirk density model of the solar atmosphere): one with the wavelength of 2 Mm, propagating at 657 km s-1, which gives us the oscillation period of 3 s; and another with the wavelength of 12 Mm whose phase speed cannot be estimated due to the short frequency range of the detection. Above 1.7 R¤, the radio flux behaves rather stochastically, with no pronounced periodic component (cf. CESRA nugget by Chen et al.).

The detected characteristics of the shorter-wavelength travelling wave suggest to associate it with one of the fast MHD modes. The Alfvén wave is very unlikely to produce the observed coherent oscillation due to its local, non-collective nature and phase mixing. It is also unclear what could the mechanism responsible for the observed 3-second periodicity of the Alfvén waves be. In contrast, the observed characteristics of the wave motion are consistent with properties of dispersive fast magnetoacoustic wave trains, compressive quasi-periodic wave pattern which could readily modulate Langmuir waves (e.g. Kontar 2001), guided by a field-aligned plasma non-uniformity, already detected in the solar corona (e.g. Nakariakov et al. 2016 for a recent review). In this interpretation, the observed periodicity results from the waveguide dispersion, and is consistent with both the theoretical estimations (see e.g. Li et al. 2018 and references therein) and previous observations in the visible light (e.g. Williams et al. 2002) and decimetric and microwave bands (e.g. Mészárosová et al. 2011) at lower heights. In this scenario, a broadband fast magnetoacoustic pulse propagates along a field-aligned magnetic non-uniformity, acting as a waveguide, and gradually evolves in a quasi-periodic wave train due to the waveguide dispersion. An electron beam follows the same magnetic flux tube and interacts with the plasma. The plasma concentration is locally modulated by the fast wave train. The beam-plasma interaction generates the quasi-periodically modulated radio emission, observed by LOFAR. 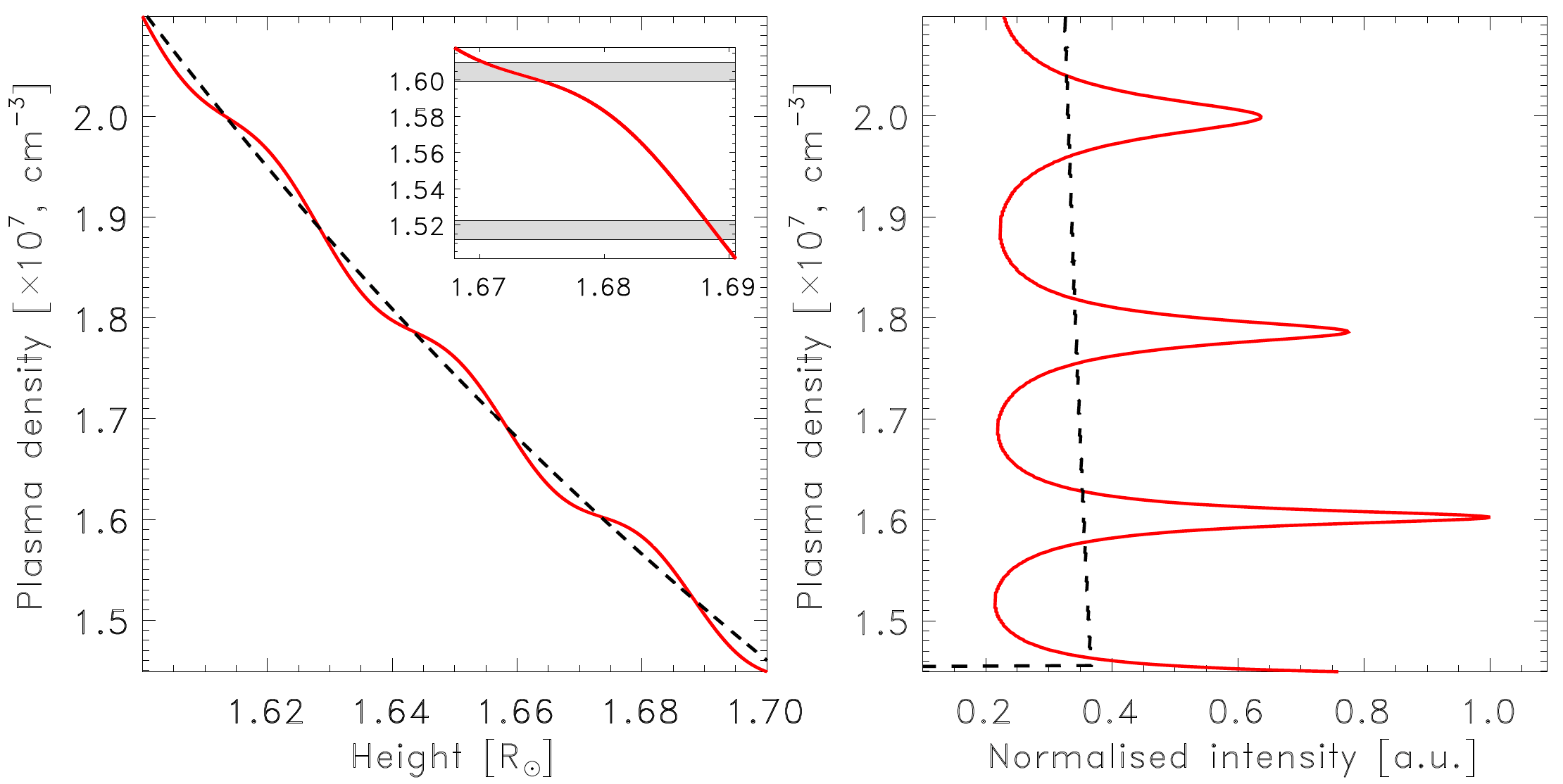 Figure 3. Mechanism for generation of quasi-periodic striae in the observed type III radio burst. The shaded areas show the LOFAR spectral resolution, 12 kHz-wide frequency channels multiplied by a factor of 10 for a better visualisation, within which the emission intensity is calculated. The black (red) lines show an unperturbed (perturbed by a harmonic density oscillation) Newkirk plasma density profile (left) and the corresponding emission intensity (right).

We suggest a simple quantitative model explaining the observed modulation of the radio flux, based on the redistribution of the radio emission intensity on spatially quasi-periodic plasma density perturbations in the fast wave (Figure 3). The electromagnetic emission intensity in a certain frequency channel is assumed to be proportional to the amount of plasma in the emitting volume. The background plasma density perturbed by the wave leads to the appearance of peaks at the corresponding plasma frequencies, which correspond to the emission coming from the regions of the lowest radial density gradient. Fitting this model into the observed dynamic spectrum (Figure 2, right-hand panel) gives us the relative amplitude of the propagating fast wave train, which is about 0.35% or 2 km s-1.

Treating the detected propagation speed of the wave as a fast speed and fixing other parameters of the plasma to their typical values at the observed height 1.7 R¤, we estimate the value of the Alfvén speed at this height to be about 622 km s-1. Using this value, we obtain the magnetic field strength to be about 1.1 G, which is consistent with the radial model of the magnetic field.

This observation is the highest detection of a fast magnetoacoustic wave train in the solar atmosphere in the radio band. The wavelength of the detected fast waves is too short to allow for the use of the imaging spectroscopy with LOFAR for their study. However, the spatially non-resolved observations interpreted as longer-period fast waves in other events (see e.g. CESRA nugget by Goddard et al.) suggest that the imaging spectroscopy with LOFAR could be applied to the analysis of similar events.