The displaced positions of radio sources away from the true source locations are usually observed in radio images at metric and decimetric wavelengths (Duncan 1979, Benz et al. 2002, Kundu et al., 2006, Kontar et al., 2017, Mann et al., 2018). The displaced radio source location is the apparent source position, that result from the scattering of radio waves (Kontar et al. 2017) or by coronal propagation effects (Mann et al., 2018). The other possibility is the wave ducting effect (Duncan 1979), wherein the ducting of radio emission, produced lower in the corona, along a density-depleted magnetic flux tube can lead to a shift in the position of the true radio source. Here we present an unusual decimetric emission located 500 arcsec away from a flaring site, as observed from the first high time cadence Giant Meterwave Radio Telescope (GMRT) solar images at 610 MHz, that we believe to be possibly due to the wave-ducting effect. 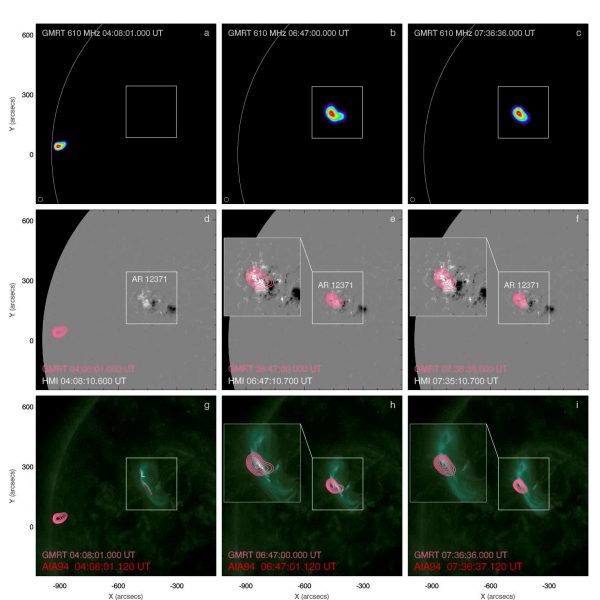 Figure 1. From left to right, the GMRT images at 610 MHz (top row) and their contour images overlaid on background SDO/HMI (middle row) and SDO/AIA 94 A (bottom row) images, respectively, at the peak times of the C1.4 and M1.0 flares and the onset of the CME on 2015 June 20.

Presented in Figure 1 are GMRT images at 610 MHz at the peak times of a C1.4 and M1.0 flares, and the onset of a coronal mass ejection (CME) on 2015 June 20.  The top row shows the GMRT images, while the middle and bottom row show their contour images overlaid, respectively, on HMI and AIA 94 A images. Radio sources are seen near the flaring active region AR12371 during the M-class flare and around the CME onset time. In contrast, a radio source located about 500 arcsec away from the flaring active region is seen with no corresponding bright footpoints or coronal features nearby. The high brightness temperature of the radio source suggest that it is due to coherent radiations. It is known that the plasma radiation sources located above active regions have usually electron plasma density that falls in the decimeter wavelength range, and so one expects that the strong radio source observed at GMRT 610 MHz would be located near the flaring active region. However, it is not the case here. Also, weak radio sources located near the flaring site are seen from the GMRT 610 MHz images during the maximum of the C1.4 flare. Though all of the GMRT sources widely separated in space, however, they all show a close temporal correlation in time among them and also with the metric type-III bursts identified in the Solar Broadband Radio Spectrometer at Yunnan Astronomical Observatory (SBRS/YNAO) during the maximum of the C1.4 flare.

Figure 2 shows the contours of all of the GMRT radio sources (S1, S2, S2 and LS) seen during the C1.4 flare maximum overplotted on the potential field source surface (PFSS) computed coronal magnetic field lines overlaid on background images of SDO/HMI (left) and SDO/AIA 94 A (right). From Figure 2, it is found that the the source LS is located on a high-arching loop with one of its end connected to the main flare site. Also, the overall configuration of all of the GMRT sources as seen from Figure 2 suggest that they possibly have a common origin. 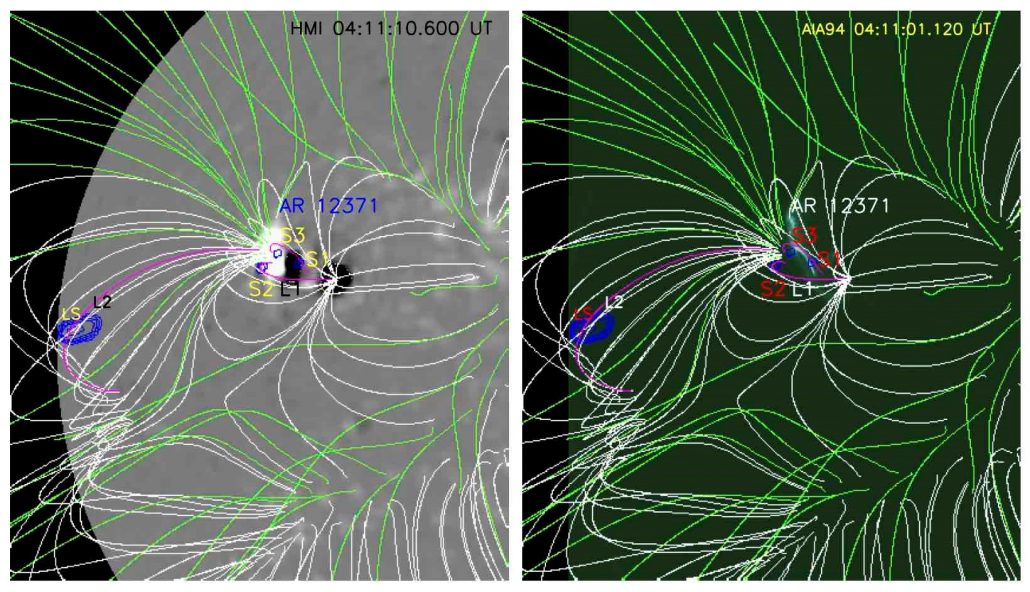 Based on the multi-wavelength analysis and PFSS extrapolations, we suggest that the source electrons of the GMRT sources and the type-III bursts originated from a common electron acceleration site, that likely located near the flaring active region.  Further, we explain the estimated heights of the GMRT sources S1, S2 and S3 by a normalized two-fold Aschwanden density model (Aschwanden & Benz, 1995), however, we can not explain the estimated height of the source LS using this normalized density model. We, thus, conclude that the source LS, if due to coherent radiations, should be generated lower in the corona. However, the apparent location of the GMRT radio source LS is possibly caused by the wave-ducting effect. The high-arching loop, on which the source LS located, could have acted as a density-depleted duct.  The streaming electrons from the common electron acceleration site generated decimetric emission lower in the corona. But the radio waves escaped along the density depleted tube into the higher corona and were observed at the apparent location that led to the displaced position of the GMRT radio source LS.