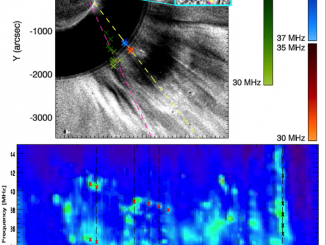 Coronal Mass Ejections (CMEs) are often viewed as the major drivers of space weather disturbances in the Sun-Earth system. Shocks driven by CMEs can excite radio emissions characterised by a slow frequency drift across dynamic spectra. These radio emissions are known as Type II solar radio bursts and can consist of two bands with a frequency ratio of 1:2. Each of these bands can split into two thinner sub-bands, a […] 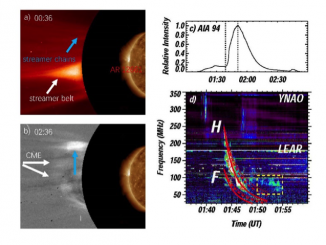 Extreme-ultraviolet (EUV) waves are spectacular horizontally propagating disturbances in the low solar corona. If an EUV wave encounters an ambient coronal structure it may trigger another horizontal wave, which is always named a ‘secondary wave’ (SW). We present the first example of upward SWs in a streamer-like structure, a bright loop-like structure developing over an active region, after the passing of an EUV wave. The EUV wave was associated with […]