Type III solar radio bursts are believed to be the most sensitive signatures of near-relativistic electron beam propagation in the corona. These intense bursts of solar radio emissions sometimes appear in the dynamic spectrum as a chain of several elementary bursts, which are known as striae, so an individual burst is composed of myriad of such stria (de La Noe & Boischot, 1972).

Although there are several generation mechanisms of those fine structures. It is widely believed that the small scale density inhomogeneities in the background plasma could create a clumpy distribution of Langmuir waves and generate the type IIIb fine structure (e.g., Takakura & Yousef 1975; Melrose 1983, Kontar 2001, Li et al 2012 and so on). We investigate the effects of background density fluctuations based on the striae structure observed with the Low Frequency Array (LOFAR) to estimate the density perturbation in the solar corona. The observations with high temporal (∼10 ms) and spectral (12.5 kHz) resolutions at 30–80 MHz allow us to observe these fine structures. 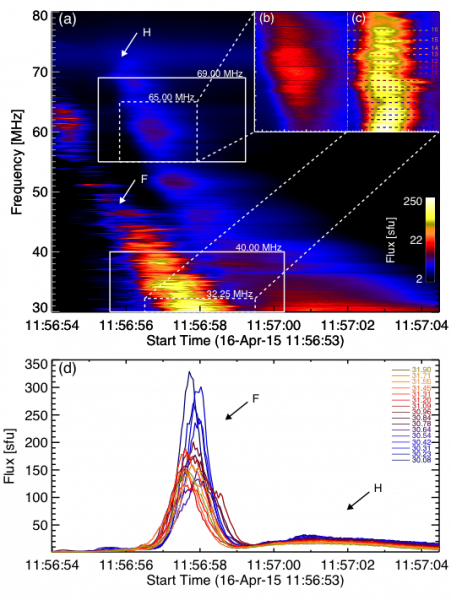 Figure 1. The top panel shows the dynamic spectrum of a clear type IIIb–type III burst pair in the frequency range of 30–80 MHz observed by LOFAR on 2015 April 16. The bottom panel shows the fluxes of the F and H components selected from the striae structure.

The type IIIb bursts with the fundamental and harmonic components are clearly shown at a frequency range of 30–80 MHz in the spectrum. The imaging of this event has been analyzed by Kontar et al. (2017). Here, we examine the fine structures in the spectrum (Chen et al, 2018). We marked the positions of peak times obtained from the Gaussian fits and obtained the flux curve from the spectrum at each frequency. Different coronal density models were used to estimate the distance of the source corresponding to an emitting frequency. We converted frequency into distance using Newkirk’s density model (Newkirk 1961) as an example and obtained a flux-distance relation for the analysis of flux fluctuations. Under the Wiener–Khinchin theorem, we made the Fourier transform of the autocorrection function R(λ) and obtain the power spectrum density of the radio flux F(r) in both the fundamental and harmonic components. They all show the similar results that the spectral index of the density fluctuation spectrum is about −1.7, which is close to the Kolmogorov spectral index of −1.67.