Type III bursts are generated when an electron accelerated close to speed of light excite the layers of coronal plasma they encounter when travelling away from the sun. These bursts are seen in a time-frequency-intensity image (called dynamic spectrum, as the time variation of the spectrum is visualized by it) as a bright patch, drifting from high to low frequencies on short time-scales ($\approx$ few-seconds). At times, along the path of the beam propagation, there occur some fluctuations in the background electron density. These fluctuations give rise to “striations” seen as fine frequency structures in the dynamic spectrum (see Figure 1). Type III bursts, exhibiting such fine structures in frequency are called as Type IIIb bursts (de la Noe and Boischot, 1972). During observations using a high resolution spectrometer backend, around 20 such bursts were recorded during various days between July – October, 2016. Given the fact that density fluctuations create these striations, we sought to use these bursts to infer the properties of the former. 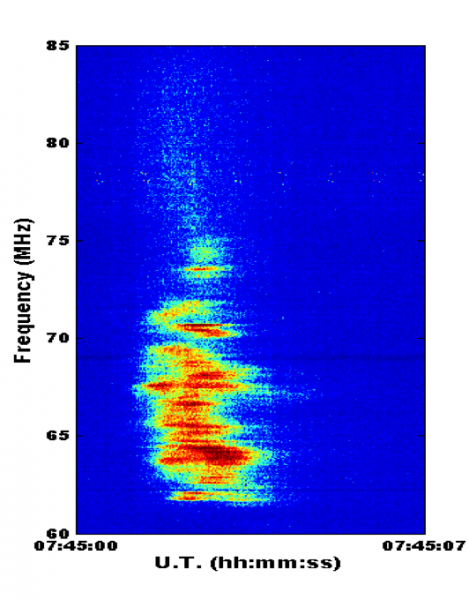 The variation of the estimated values with heliocentric distance range was studied using a 10x Baumbach model of coronal background electron density, which would correspond to 1.6 – 2.2 $R_{\odot}$. This revealed that $\frac{\Delta{N_e}}{N_e}$ varied as a weak power law with an index of 0.3 with heliocentric distance, $r$. We obtained a similar trend when we plugged in our values with those obtained by other workers to study the variation of $\frac{\Delta{N_e}}{N_e}$ with $r$, all the way up to 1 A.U. Since the striations of the type IIIb bursts are created due to local density variations, the scale of turbulence also can be inferred from the bandwidths of the former. The variation of the density modulation index over different range of scales was studied and was found to show a Kolmogorov like behavior ($\alpha$~ -5/3), contrary to our previous belief regarding the same turbulence close to the Sun. 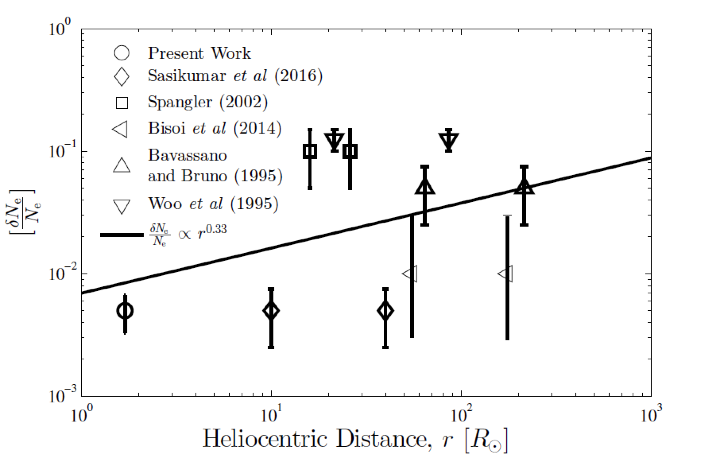 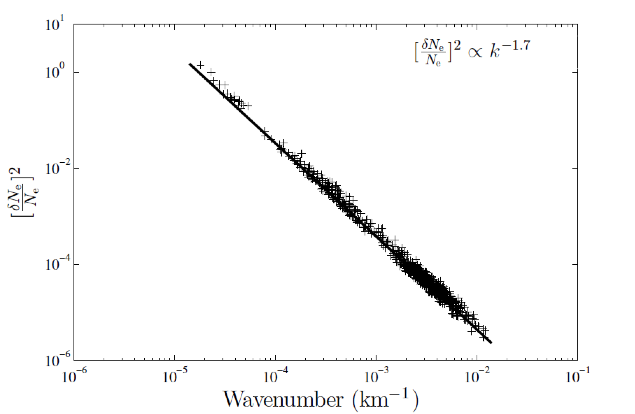 Figure 3 Turbulence spectrum of electron density fluctuations in the low corona. Note that it follows a power law with an index of ~-5/3

This shows a power-law variation with -4.2 as the index with $r$. The peak value of $C_{n}^2$ also is lower than previous estimates (Spangler, 2002; Sasikumar Raja et al, 2016). The results obtained in this paper indicate that turbulence due to density fluctuations may be lower close to the sun than previously thought, and is significant towards understanding angular broadening of radio sources in the corona and underestimation of quiet sun temperature.

Density turbulence in the lower corona (r~1.6-2.2 $R_{\odot}$) has been estimated using fine structures in type III bursts (type IIIbs). The results obtained are consistent with those obtained at higher radian distance range using Spacecraft beacon observations, Very Long Baseline Interferometry, Radio source occultation, etc. to name a few. The value of the turbulence amplitude, $C_{n}^2$ is lower from our observations, which shows that turbulence closer to the sun is lesser than that away from it.