The radio imaging and spectral observations were carried out with GRAPH (Ramesh et al. (1998)) and GRASP (Kishore et al. (2015)). The EUV and white-light coronagraph data was obtained with SDO/AIA (Lemen et al. (2012)) instrument and SOHO/LASCO-C2 (Bruecker et al. (1995)). The X-ray data used was obtained with GOES_15/XRS (Chamberlin et al. (2009)) and ASTROSAT/SSM (Seetha et al. (2006)). We made a composite image in three different wavelengths, i.e EUV 171 Angstrom at 3:26 UT (peak time of the X-ray flare), radio contours at 80 MHz at 3:31 UT (Type II burst at 80 MHz) and SOHO/LASCO-C2 coronagraph image at 4:00 UT (first appearance of CME in LASCO FoV). This showed that all these three disturbances have the same source region, given that those are propagating radially outwards. 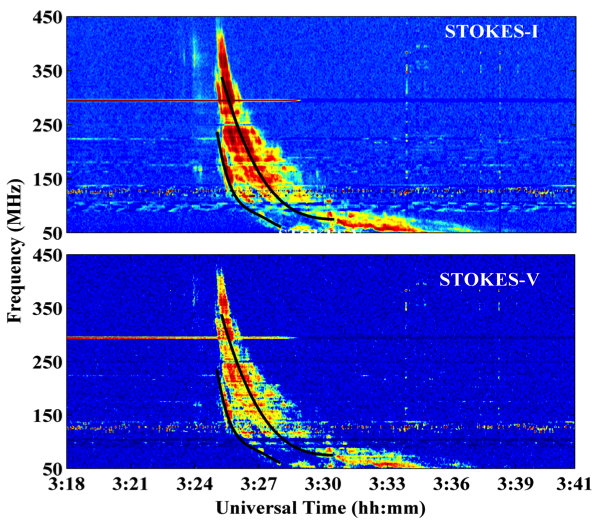 Figure 1. The top and bottom panel shows the type II radio burst spectra observed with GRASP on 4th November, 2015 in Stokes-I and Stokes-V, respectively. The fundamental and harmonic components of this radio burst are marked with black line.

We converted the type II frequencies into heliocentric distances (in terms of $R_{\odot}$) using Gopalswamy model (Gopalsway et al. (2013)), which is based on observations of type II radio burst and CMEs. We compared the shock speed profile with the X-ray light curve obtained from both GOES-15/XRS and ASTROSAT/SSM. The shock speed and X-ray curve had followed a similar profile, both peaking at the same time $\approx$ 3:26 UT. The deceleration rate for shock speed was lesser than that of the X-ray light curve. This is a strong suggestion that even though the X-ray flare has ended, the disturbances in the local density were sustained, and hence this type II burst was not associated with the flare, but with the CME observed in LASCO FoV. Similar comparison study was done with AIA 171 \AA data, and we found that EUV wavefront was moving with much slower speed than the shock wave associated with the type II burst. 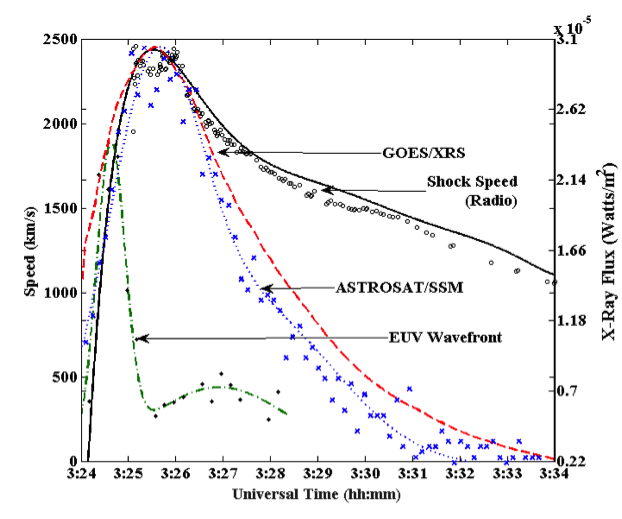 Figure 2. This figures shows the time profile of shock speed which was derived using the radio burst, shock profile of EUV wavefront obtained from AIA 171 \AA and X-ray light curve recorded with GOES-15/XRA and ASTROSAT/SSM.

Furthermore, we calculated the correlation between X-ray flux and radio shock speed which was $\approx 86 \%$, indicating a strong dependency till the peak time of the flare.

This high frequency type II radio burst on 4th Novemeber, 2015 had an unusual high drift rate $\approx$ 2 MHz, which had split-band feature in the harmonic component. The composite images of EUV wavefront at 171 Angstrom, the radio contours at 80 MHz and SOHO/LASCO-C2 coronagraph showed an excellent spatio-temporal correlation. Further investigation into the EUV dataset has suggested that the wavefront speed in the EUV FoV was $\approx 3 \times$ lower than the shock speed measured with the radio data, which indicates that although the source region for this type II burst and EUV wavefront was the same, they were not the same disturbances. There is excellent correlation between X-ray flare profile and radio shock speed profile ($\approx 86 \%$) and interestingly, these two follow almost the same profile. We also noted that the deceleration rate of the light curve of the X-ray flare was much larger in comparison to that of the shock speed derived from radio data, which is a strong indication that the type II radio burst was with the CME, and not with the flare. 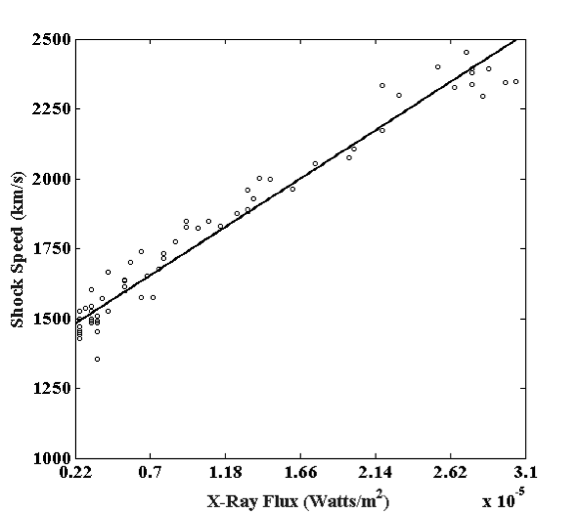 Figure 3. The correlation between shock speed and x-ray flux (GOES-15/XRS).