Flaring activity on the Sun triggers waves and oscillations in the solar corona. The study of these waves and oscillations allows comparisons to magnetohydrodynamic (MHD) theory and modelling to be made, and seismological inversions based on this comparison allow local plasma parameters to be measured indirectly (e.g. De Moortel & Nakariakov 2012).

Simultaneous EUV imaging and radio observations make it possible to study how these waves and oscillations can produce or modify radio emission from the coronal plasma. One of the most intensively studied examples of this are type II radio bursts, which are observed during coronal mass ejections (CMEs) (e.g. Pick & Vilmer 2008). Coronal type II radio bursts are usually seen as two locally-parallel emission lanes on solar radio spectrograms with an instant frequency ratio of approximately 2, drifting from high to low frequencies over time. It is generally accepted that this radio emission is a result of plasma wave excitation at fronts of MHD shock waves propagating upwards through the corona. The lower and higher frequency lanes are thought to be emission at the fundamental and second harmonic of local plasma frequency, respectively

We analysed an individual flaring event, SOL2014-11-03T22:15, the subsequent CME and wave activity and the associated type II burst. We found evidence that a series of quasi-periodic ‘sparks’ in the radio spectra are linked to disturbances seen in the low corona in the EUV band. This is the first observation which links quasi-periodic fast waves of the EUV intensity to quasi-periodic features in radio spectra. 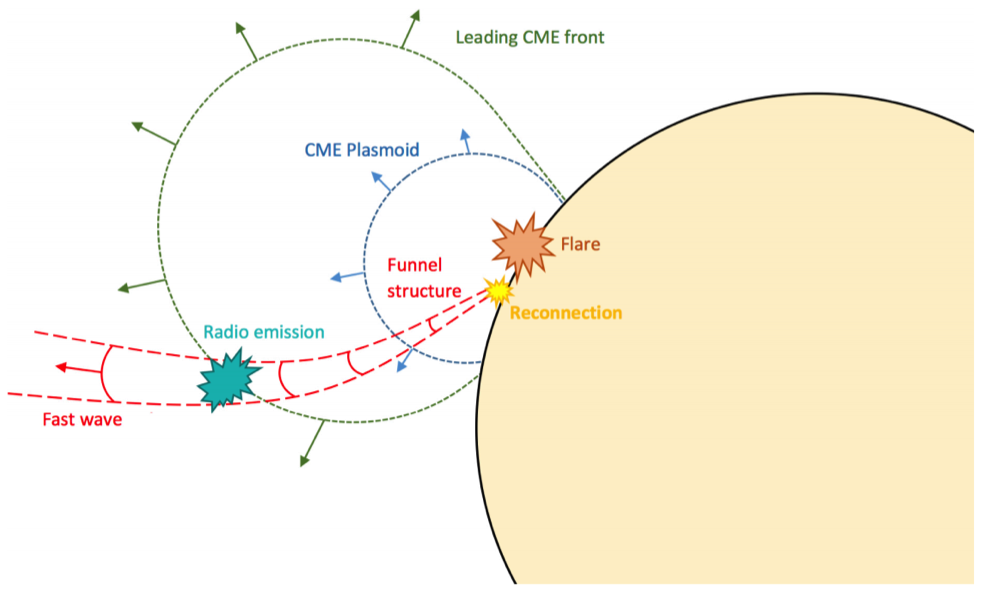 Figure 1. A schematic synopsis of the event. A flare occurs which is followed by a CME comprising of the leading edge or EUV wave (green) and the main CME plasmoid (blue). A funnel structure (red) within the active region is seen to host a series of rapidly propagating quasi-periodic waves. A brightening is observed at the base of this structure and is interpreted as a reconnection site where the waves are impulsively excited. After a certain delay periodic radio sparks are observed, which occur at an estimated height consistent with the leading feature of the CME, and a periodicity consistent with the fast wave period. 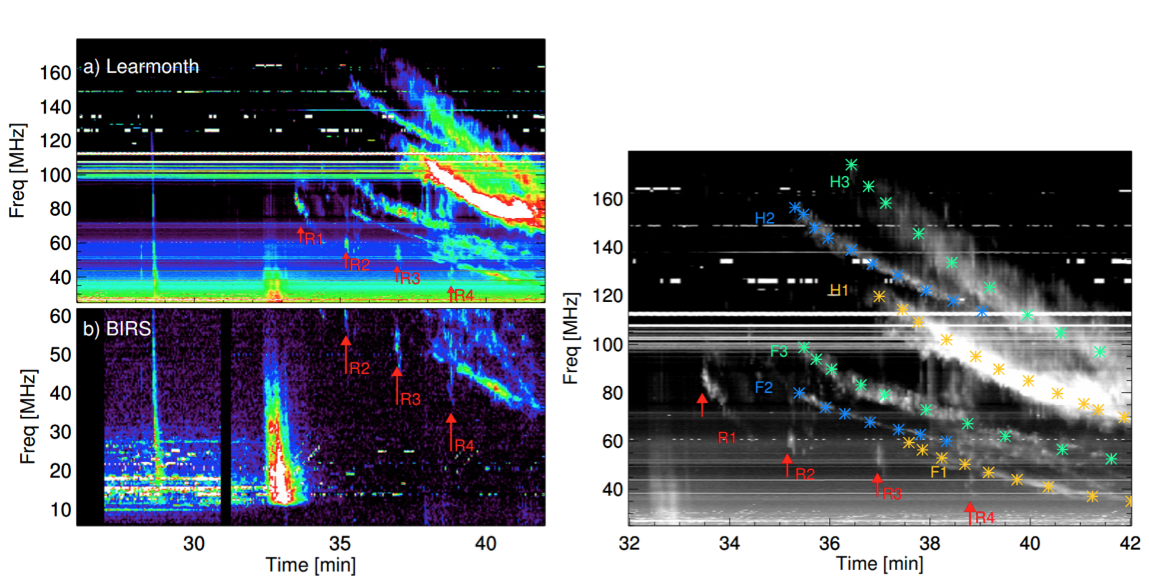 Figure 2. Left: Learmonth (top) and BIRS (bottom) radio spectra in the ranges 25-170 MHz and 5-50 MHz respectively. Four regions of enhanced emission are indicated by R1-R4. Right: A zoomed region of the Learmonth spectra highlighting the radio sparks as well as the three fundamental and harmonic emission lanes of the type II burst.

A series of periodic ‘radio sparks’ (finite-bandwidth, short-duration isolated radio features) were detected in both the Learmonth and BIRS dynamic spectra. They preceded a split-band type II burst consisting of three fundamental lanes and their second harmonic counterparts (Figure 2). Four radio sparks were detected with a period of 1.78±0.04 min, with the first spark occurring at 22:33 UTC. Their central frequencies drift from high to low frequencies in the same manner as the type II lanes.

EUV imaging from SDO/AIA identified a series of quasi-periodic rapidly propagating enhancements (Figure 3), which we interpret as a fast wave train. These propagate upwards into the corona along a guiding plasma structure. At least five enhancements were detected, with a period of 1.7 ±0.2 min, starting at 22:28 UTC. These waves occur after part of the CME plasmoid has interacted with the base of the plasma funnel, potentially resulting in magnetic reconnection in that region.

Figure 3. Left: Two running-difference snapshots of the periodic fast waves detected in the EUV images. The vertical blue lines indicate the position of the wave front. Right: An intensity time series extracted at one position along the path of the fast waves. The periodic enhancements are labelled as E1-E5. Below is the wavelet spectra of the time-series, showing the main periodicity of just under 2 mins.

Unfortunately, no spatially-resolved observations of the radio sources are available for this event, therefore our analysis was restricted to the radio spectra. From the central frequency of the radio sparks the local electron density at the emission location is calculated for each. The electron density calculated by an empirical formula, was used to obtain the height above the surface at which the emission occurs, and the propagation speed of the radio emission location. The emission heights derived coincide roughly with the forward-projected location of the leading edge of the CME. The inferred propagation speed of 630 km s−1, is comparable to the measured speed of the CME leading edge, 500 km s−1, and the speeds derived from the drifting of the type II lanes.

Due to the matching periods, we consider the radio sparks to be caused by the periodic fast waves observed in the EUV band. This is supported by the time offset between the observations, due to the time taken for the fast waves to reach the height at which the radio emission is generated. The height of the radio source and its speed approximately match the height and velocity of the leading CME feature.

We interpret our observations with the following physical scenario (Figure 1). A series of fast waves are produced in the active region during a flare, during an observed magnetic reconnection event triggered by the CME. The waves propagate upwards along a funnel plasma structure, and interact with the CME leading edge, or some associated disturbance that propagates slower than the fast wave train. This results in the acceleration of electrons, the bump-on-tail instability, and emission of radio waves with the frequency corresponding to the local electron plasma frequency, appearing as quasi-periodic sparks in the radio spectrograph. However, proper theoretical modelling of the process is needed.

The period of a series of radio sparks which precede a type II burst, 1.78±0.04 min, matches the period of a fast wave train observed at 171 Å, 1.7 ±0.2 min. The inferred speed of the emission location of the radio sparks, 630 km s−1, is comparable to the measured speed of the CME leading edge, 500 km s−1, and the speeds derived from the drifting of the type II lanes. The calculated height of the radio emission matches the observed location of the CME leading edge. From the above evidence we propose that the radio sparks are caused by the quasi-periodic fast waves, and the emission is generated as they catch up and interact with the leading edge of the CME (Figure 1).

Based on the paper: