Quasi-continuum radio emissions of duration ~10-60 min that occur along with flares and coronal mass ejections (CMEs) in the solar atmosphere are termed as type IV bursts. The bursts are non-thermal in nature and can be classified into two categories, i.e. moving type IV (type IVm) bursts and stationary type IV (type IVs) bursts, depending on their time-frequency characteristics in the dynamic spectrum. Amongst the two, the former has a comparatively closer association with CMEs. This provides an opportunity to independently infer some of the characteristics of CMEs like the electron density, strength of the associated coronal magnetic field, etc. from simultaneous observations of the two phenomena. Ever since the launch of space missions like the Solar and Heliospheric Observatory (SoHO) and the Solar-Terrestrial Relations Observatory (STEREO), it has become possible to observe CMEs with comparatively good contrast, better time cadence, and closer to the Sun. These advantages facilitate comparison with complimentary and simultaneous ground-based observations of the associated radio transients. We report low-frequency (< 100 MHz) observations of a moving type IV radio burst that had close spatio-temporal association with a white-light CME. The radio burst was observed with the Gauribidnur RAdioheliograPH (GRAPH), Gauribidanur LOw-frequency Solar Spectrograph (GLOSS), and the Gauribidanur Radio Interfometric Polarimeter (GRIP) in the Gauribidanur observatory. The electron density near the burst region was estimated from white-light coronagraph polarized brightness (pB) images of the CME. The results suggest that second harmonic plasma emission from the enhanced electron density in the CME leading-edge (LE) is the cause of the radio burst.

Figure 1 shows the GLOSS observations of a type IVm radio burst in the frequency range 85 – 40 MHz on 31 March 2014 during the interval of 08:24 – 08:56 UT. Figure 2 shows the GRIP observations of the above event in the transit mode at 80 MHz. The estimated Stokes I peak flux density of the burst is ~57700 Jy. The corresponding estimate for Stokes V emission is ~4100 Jy. The degree of circular polarization (r) calculated using the above values is ~7%. 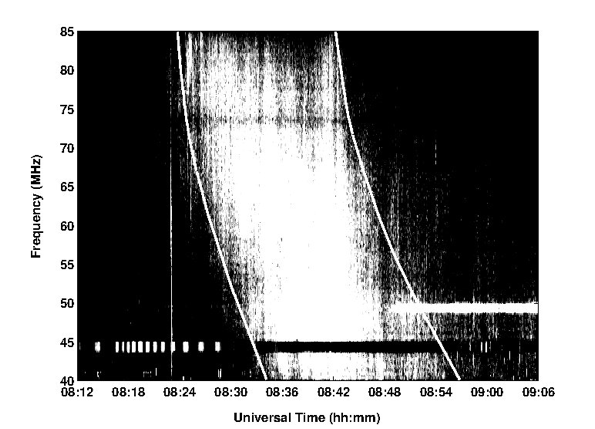 Figure 1: Dynamic spectrum of the type IVm radio burst observed with the GLOSS on 31 March 2014 during 08:24 – 08:56 UT in the frequency range of 85 – 40 MHz. The horizontal patches near 45, 50, and 75 MHz are due to radio frequency interference. The vertical emission feature close to 08:22 UT is a type III burst. The two slanted white lines indicate the approximate onset and the end of the burst at different frequencies. 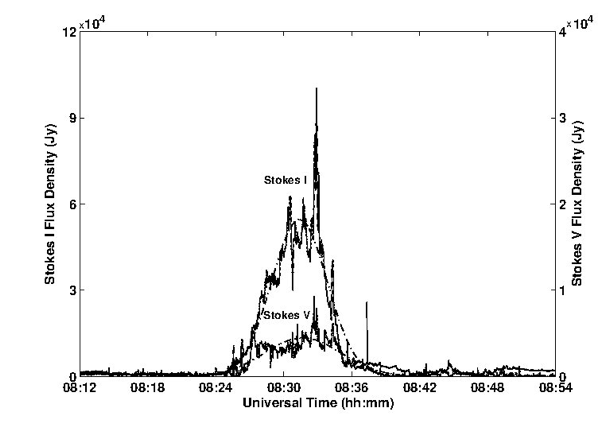 Figure 2: Stokes I and V time profiles of the type IVm burst observed with the GRIP on 31 March 2014 at 80 MHz. The dash-dotted lines superposed on the time profiles are the fit to the observations. 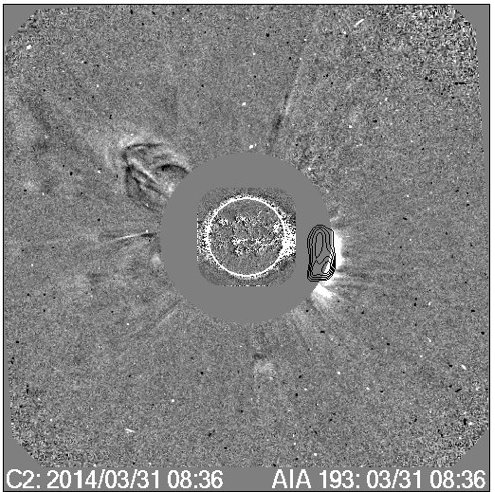 Melrose, Dulk, and Smerd (1978) had shown that for solar radio continuum bursts due to second-harmonic plasma emission, the magnetic field strength B = (0.18 r f)/a(q), where a(q) depends on the angle q between the magnetic field and the viewing direction. We assumed a(q) ~ 1 since (i) the heliographic coordinates (S15W77) of the sunspot region associated with the type IVm burst correspond to a viewing angle q ~ 77o, and (ii) the half-power widths and heliocentric distances of type IVm bursts at 80 MHz correspond to an average cone angle of 30o (Robinson, 1978). The close spatial association between the type IVm burst and the CME LE, the occurrence of the CME close to the POS where the magnetic field is likely to be nearly perpendicular to the LOS, and the low values of the degree of circular polarization are consistent with this assumption. Substituting the values in the above equation, we obtain B ~ 1.0 G.

We carried out an analysis of the low-frequency radio observations of the type IVm burst associated with the white-light CME of 31 March 2014. The results indicate that the radio burst is due to second-harmonic plasma emission from the CME LE. The estimated strength of the magnetic field in the latter is B ~ 1 G at r ~ 2.2 Rs.

The above work has appeared in: