The phenomena of emission of radiation by the Sun, which are known as type II and type III solar radio bursts, have been known and investigated for more than sixty years. The bursts of radiation occur at a frequency corresponding to the plasma frequency at the source region, and harmonics are frequently observed. It is commonly accepted that the radiation is generated by a nonlinear mechanism, proposed by Ginzburg and Zheleznyakov (1958), which depends on the presence of an electron beam at the source region.

As a contribution to the study of these radiation bursts, we have investigated the production of transverse \(T\) waves at a fundamental frequency and its harmonics, using a formalism based on weak turbulence theory. We have considered the possibility of the presence of counter-streaming electron beams, which may occur when the geometry of the coronal mass emission contains a double hump structure. In what follows we briefly describe the methodology of the analysis and the results that we have found.

The weak turbulence formalism that we utilize takes into account the presence of Langmuir \(L\) and \(T\) waves, and also ion acoustic (\(S\)) waves, and the occurrence of different physical mechanisms: single-particle fluctuations, quasilinear diffusion, three-wave decay/merging processes, and scattering processes. The detailed derivation of the set of equations which we utilize for the time evolution of the spectral amplitudes of the different types of waves and of the velocity distributions of the plasma particles can be found in a series of papers, as Yoon (2000), Yoon (2005) and Yoon (2006), and the complete equations appeared in more recent papers, as in Ziebell et al. (2015).

The equations are solved by numerical methods. The ions are considered stationary, with a Maxwellian distribution. For the initial electron distribution function, we assumed a Maxwellian background population and a pair of forward and backward beam components, each with number densities assigned by $n_f$ and $n_b$, and with beam velocities $v_f$ and $v_b$. 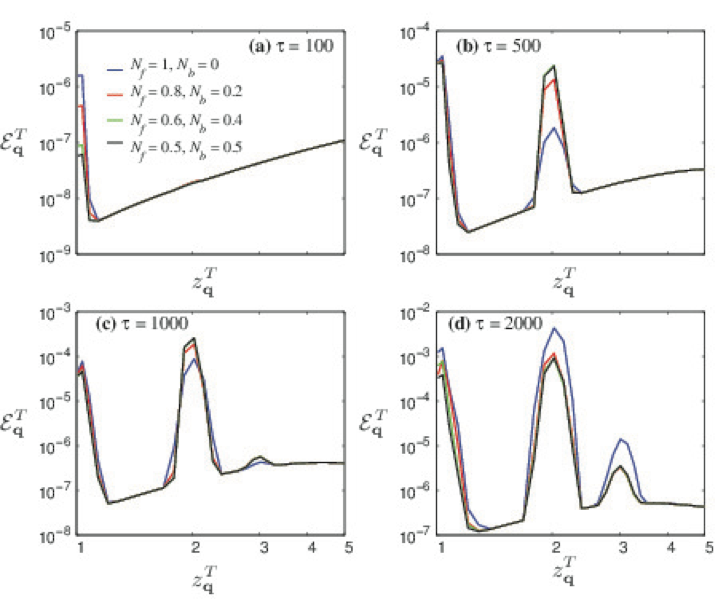 Figure 1. Normalized $T$ wave intensity as a function of normalized $T$ wave frequency. Forward and backward beam speeds are equal in magnitude, $U_f=10$ and $U_b=-10$, and four different combinations of the number density ratios are used. This figure is the same as figure 2 of Ziebell et al. (2016).

In addition to studying the effect of the counter-streaming beams, we have also investigated the effect of different nonlinear mechanisms on the evolution of the beam-plasma system, considering as an example the case of a single electron beam. The results obtained have appeared in Ziebell et al. (2015). The analysis was made by turning on/off each term in the basic set of equations. This procedure is possible in the weak turbulence formalism, while in PIC simulations, for instance, separated mechanisms can not be singled-out in such a way.

To summarize the findings obtained in the case of counter-streaming electron beams, we can state that the fundamental emission ($F$) increases in intensity if the forward beam speed is fixed and the backward beam speed is increased, for fixed beam densities. Similarly, if the beam speeds are fixed, the fundamental emission is most intense when there is only one beam. The second-harmonic emission ($H$), on the other hand, shows that the fastest time development occurs when the counter-streaming beams have the same density and speed, although that the final level of emission shows that a single beam with larger density can overcome the emission due to two opposite and less dense beams. The weak third harmonic emission, on the other hand, shows no clear dependency on either the backward beam speed variation or the relative beam density variations.