Accelerated electron beams are believed to be responsible for both hard X-ray (HXR) and strong coherent radio emission during solar flares. However, so far the location of the electron acceleration and its physical parameters are poorly known. The solar microwave Type-III pair burst is possibly the most sensitive signature of the primary energy release and electron accelerations in flares (Aschwanden & Benz, 1997, ApJ). A Type-III pair is composed of two Type-III burst branches beginning almost at the same time: one is a normal Type-III burst with negative frequency drift and the other is a reverse-sloped (RS) Type-III burst with positive frequency drift. The normal branch can track the upward energetic electron beam, and the RS branch is associated to the downward electron beam (Robinson and Benz, 2000, Sol Phys). In an ideal condition, a Type-III pair is made up of a normal branch and a RS branch simultaneously (Aschwanden et al. 1993, ApJ; Huang et al. 1998, Ap&SS). Practically, observations show a group of normal Type-III bursts at low frequency band and a group of RS Type-III bursts at higher frequency band occuring in same time interval (Tan et al. 2016, ApJ), which might reflect complex irregular magnetic structures, repeated electron acceleration, and rapid changes in the source regions (Benz et al. 1992, Sol Phys). We call such complex assembly a Type-III pair train.

This work reported a peculiar and interesting train of microwave Type-III pair bursts in the impulsive rising phase of a solar flare on 26 September 2011 (Figure 1). The observations include radio spectrogram at frequency of 0.80 – 2.00 GHz from the Ondvrejov radiospectrograph in the Czech Republic (ORSC), hard X-ray from RHESSI and GRB/Fermi, EUV images from SWAP/PROBA2, and magnetogram from HMI/SDO. 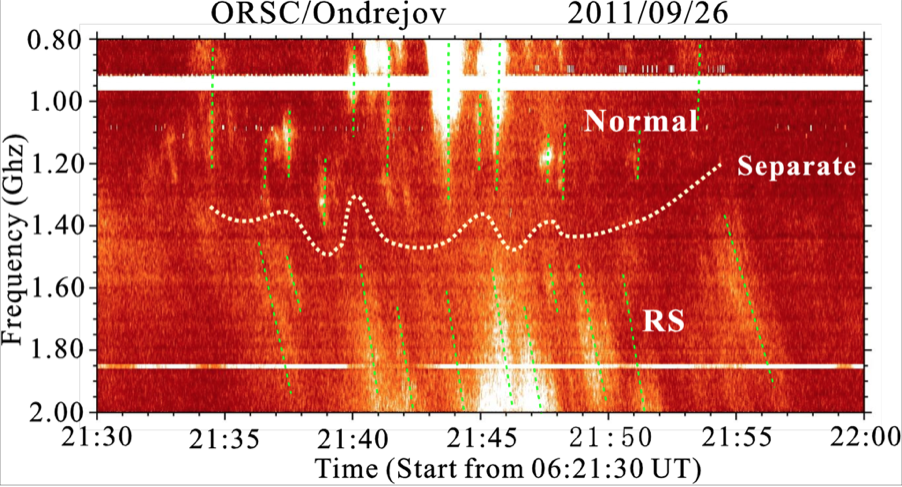 Figure 1: The spectrogram of microwave Type-III pair train observed by ORSC/Ondvrejov on 26 September 2011. Green dashed lines show the ridges of Type-III bursts. The white dashed curve shows the separation frequency between the normal Type-III branches and the RS Type-III branches.

By using a recently developed method (Tan et al., 2016, RAA), we diagnosed the plasma density, temperature, plasma β, magnetic field near the source region, the energy of energetic electrons and the distance between the acceleration region and the emission start sites of Type-III bursts. From the diagnostics, we find that (Figure 2): (1) The plasma density, temperature, magnetic field, and the distance between the acceleration region and the emission start sites almost have no obvious variations during the period of Type-III pair trains, while the energy of electrons has an obvious peak value which is consistent to the hard X-ray emission. (2) The plasma β is much higher than unity showing a highly dynamic process near the emission start site of Type-III bursts. (3) Although the reversed-slope Type-III branches drift slower at one order of magnitude than that of the normal Type-IIIs, the related downgoing and upgoing electrons still could have the same order of magnitude of energy. These facts indicate that both the upgoing and downgoing electrons are possibly accelerated by a similar mechanism and in a small source region. These diagnostics can help us to understand the physics in the source region of solar bursts. 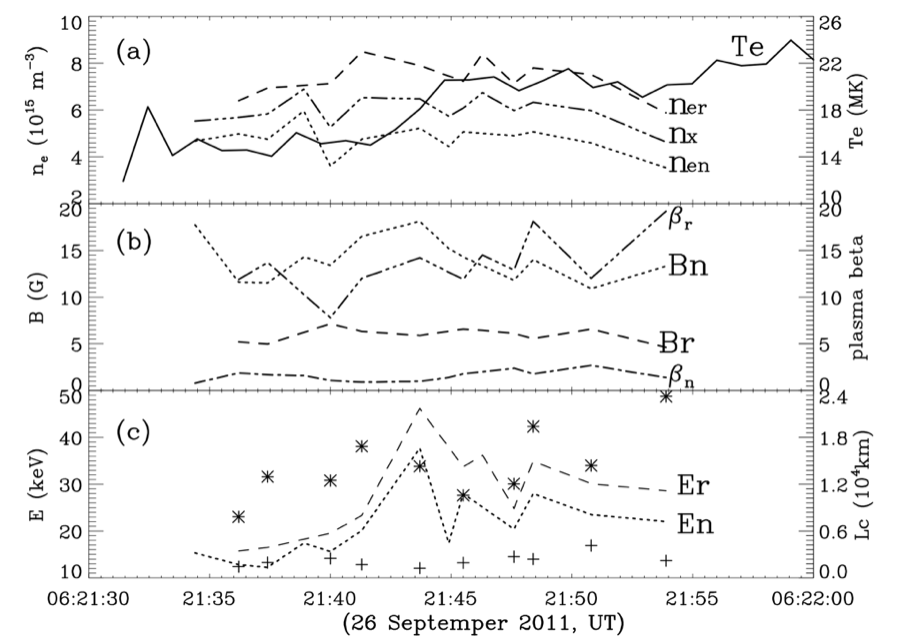