It was recently reported that a significant part of the Langmuir waveforms observed by the STEREO satellite (Graham and Cairns, 2013) during type III solar radio bursts are likely consistent with the occurrence of electrostatic decay instabilities, when a Langmuir wave \(\mathcal{L}\) resonantly interacts with another Langmuir wave \(\mathcal{L}^{\prime}\) and an ion sound wave \(\mathcal{S}^{\prime}\) through the decay channel \(\mathcal{L} \rightarrow\mathcal{L}^{\prime}+\mathcal{S}^{\prime}\). Usually such wave-wave interactions occur in regions of the solar wind where the presence of electrons beams can drive Langmuir turbulence at levels allowing waves \(\mathcal{L}\) to decay. Moreover, such solar wind plasmas can present long-wavelength randomly fluctuating density inhomogeneities or monotonic density gradients which can modify significantly the development of such resonant instabilities (Ryutov 1969; Kontar and Pecseli, 2002; Krafft et al. 2015). If some conditions are met, the waves can encounter a second decay cascade (SDC) according to \(\mathcal{L}^{\prime}\rightarrow\mathcal{L} ^{\prime\prime}+\mathcal{S}^{\prime\prime}\).

Analytical estimates and observations based on numerical simulations show that the Langmuir waves \(\mathcal{L}^{\prime\prime}\) produced by this SDC can accelerate beam particles up to velocities and kinetic energies exceeding respectively two times the beam drift velocity \(v_{b}\) and half the initial beam kinetic energy (Krafft and Volokitin, 2016). Moreover, this process can be particularly efficient if beforehand scattering effects of waves on the background plasma inhomogeneities have already accelerated a sufficient amount of beam electrons up to the velocity range where the phase velocities of the \(\mathcal{L}^{\prime\prime}\) waves are lying. 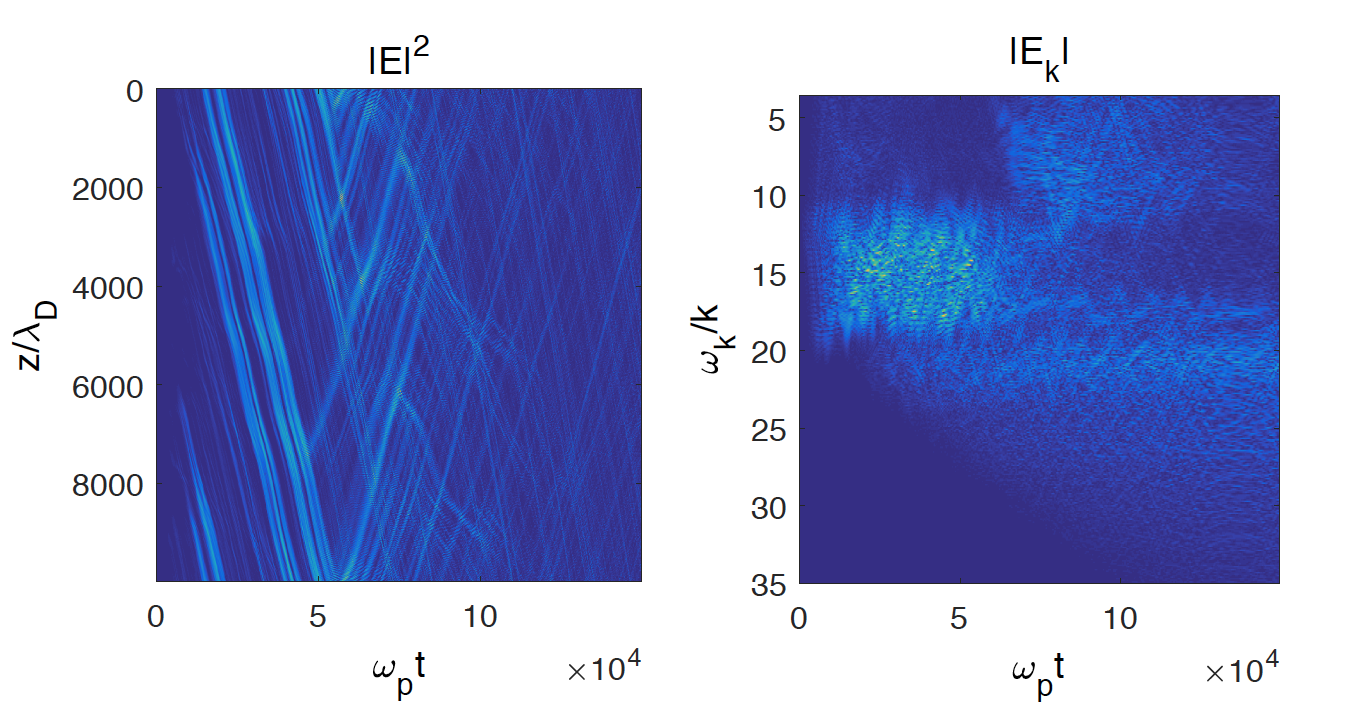 In the velocity region \(v\gtrsim v_{b}\) where the beam velocity distribution presents a negative slope during all the time evolution as well as a significant density of electrons at the time of occurrence of the SDC, the waves \(\mathcal{L}^{\prime\prime}\) which have phase velocities \(v_{\varphi }\gtrsim v_{b}\) can damp and release part of their energy to particles and accelerate them. This process can be observed in Fig. 2 (lower panel), where the part of the beam velocity distribution where \(v>v_{b}\), so-called  \(f_{t}(v)\), is presented for two times after the occurrence of the first decay cascade: \(\omega_{p}t_{1}\simeq59601\) and \(\omega_{p}t_{2}\simeq126720\). At time \(t_{1}\) the scattering effects are fulfilled since at least \(40000\omega_{p}^{-1}\) whereas the first cascade of the decay process is already almost saturated; one can see that a population of accelerated particles already exists, as one of the consequences of the scattering of Langmuir waves on the density inhomogeneities, of the random shift of the wave-particle resonance condition \(kv\simeq\omega_{p}\) and of the transport of wave energy to smaller \(k\). But at time \(t_{2},\) i.e. around \(66000\omega _{p}^{-1}\) after \(t_{1}\), \(f_{t}(v)\) is significantly modified: the electron density is decreased in the range \(v_{b}\lesssim v\lesssim18v_{T}\) whereas increased for \(v\gtrsim18v_{T},\) indicating that some particles have been accelerated; this can be explained taking into account that the SDC has started near \(\omega_{p}t\simeq70000\).  At times above \(t_{2}\), \(f_{t}(v)\) stabilizes and presents a monotonic decreasing negative slope: the SDC process is saturated and \(f_{t}(v)\) evolves only slightly and slowly. 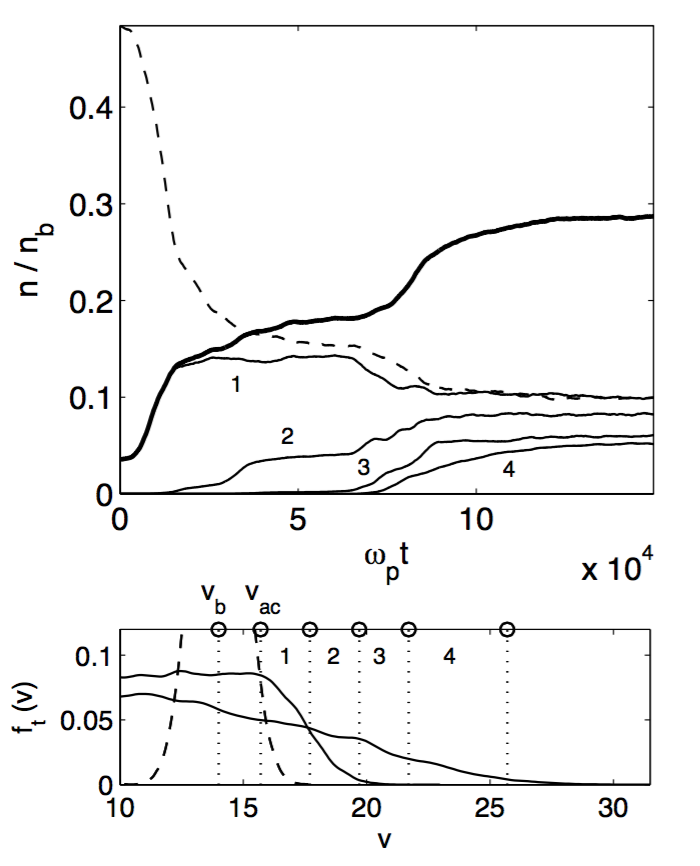 The simulation results show that electron acceleration observed at large times results from damping of Langmuir waves \(\mathcal{L}^{\prime\prime}\) coming from the second decay cascade. It is useful to discuss such observations on the basis of available theoretical arguments and, in particular, the competition between the various physical processes at work during the full time evolution. The first one consists in the transfer of Langmuir wave energy to smaller \(k\)-scales due to the interactions of these waves with the plasma, that is, their scattering on the fluctuating density inhomogeneities (time scale \(\tau_{s}\)). Second, resonant wave-particle interactions govern the beam instability and the wave growth which can be described, in the frame of the weak turbulence theory for homogeneous plasmas, by quasilinear diffusion and spectral saturation (time scale \(\tau_{D}\)). Third, nonlinear wave-wave interactions occur in the form of resonant three-wave decay (time scale \(\tau_{2}\)), for which some analytical estimates can be provided by the  turbulence theory; however, this concerns only limited aspects, as we know that decay is significantly affected by the presence of inhomogeneities constraining the interactions to be localized.

Numerical simulation results and analytical estimates have shown that the process of electron acceleration by daughter Langmuir waves \(\mathcal{L}% ^{\prime\prime}\) coming from the second cascade \(\mathcal{L}^{\prime}\rightarrow\mathcal{L}^{\prime\prime}+\mathcal{S}^{\prime\prime}\) of the electrostatic decay \(\mathcal{L}\rightarrow\mathcal{L}^{\prime}+\mathcal{S}% ^{\prime}\) of Langmuir waves \(\mathcal{L}\) driven by an electron beam can occur at a significant level in solar wind regions where density fluctuations may exist, if the beam drift velocities \(v_{b}\) satisfy roughly the condition \(8v_{T}\lesssim v_{b}\lesssim35v_{T}.\) This range corresponds to the drift velocities of the beams actually existing in the solar wind regions of the foreshock and the type III solar bursts’ sources. Moreover, such process can be particularly efficient if beforehand scattering effects of Langmuir waves on the background plasma density inhomogeneities have already accelerated a sufficient amount of electrons. Then the Langmuir waves \(\mathcal{L}% ^{\prime\prime}\) produced by the second decay cascade can accelerate again these beam particles up to velocities and kinetic energies exceeding respectively two times the beam drift velocity \(v_{b}\) and half the initial beam energy. Note that the two acceleration processes at work, i.e. due to the scattering of waves on the density inhomogeneities and to the second decay cascade, do not occur in the same range of time, as the first one is already saturated when the rise of the second one becomes significant.

This work was granted access to the HPC resource of IDRIS under the allocation 2013- i2013057017 made by GENCI. This work has been done within the LABEX Plas@par project, and received financial state aid managed by the Agence Nationale de la Recherche, as part of the programme “Investissements d’avenir” under the reference ANR-11-IDEX-0004-02. C.K. acknowledges the “Programme National Soleil Terre” (PNST) and the Centre National d’Etudes Spatiales (CNES, France).