Regular observations of the Sun have started at the first stage of the multiwave Siberian Radioheliograph (SRH). It is a T-shaped interferometer currently consisting of 48 antennas observing in a 4-8 GHz operating frequency range with a 10 MHz instantaneous receiving band. The SRH’s antennas are installed on the central antenna posts of the Siberian Solar Radio Telescope (SSRT: Grechnev et al., 2003). The maximum baseline is currently 107.4 m providing an angular resolution up to 70 arc seconds.

Figure 1. The central part of the SRH antenna array and the northern arm of SSRT.

SSRT, which is transformed into SRH, is a cross-shaped interferometer consisting of East-West and South-North equidistant linear arrays of 622.3 m, each with 128 antennas. The images are formed by scanning the Sun, firstly, due to the simultaneous receiving at different frequencies in the 5.67-5.79 GHz band and, secondly, due to Earth’s diurnal rotation. Thus, SSRT can produce images every 2-3 minutes at best.

SRH uses a different imaging principle, a parallel Fourier synthesis (Lesovoi et al., 2014). Both circularly-polarized components are measured. The observing frequencies are set by software. The time to switch from one frequency to another is currently about 2 s, and the accumulation time at each frequency is 0.28 s for each polarized component. The sensitivity to compact sources reaches $10^{-4}$ of total solar flux.

Remaining SSRT antennas continue observations at 5.7 GHz in the original operating mode, providing the images of compact sources with a resolution of up to 21 arc seconds. Daily maps in intensity and circular polarization near local noon are available at http://badary.iszf.irk.ru.

Figure 2. Images of the Sun at five frequencies on 9 June 2016 in the right (RCP) and left (LCP) circularly polarized emissions.

Raw data are available at ftp://badary.iszf.irk.ru/data/srh48. Software has been developed and tested to produce raw solar images, clean them, and calibrate in brightness temperature units. File formats for storage of data and software for their remote access are being developed. 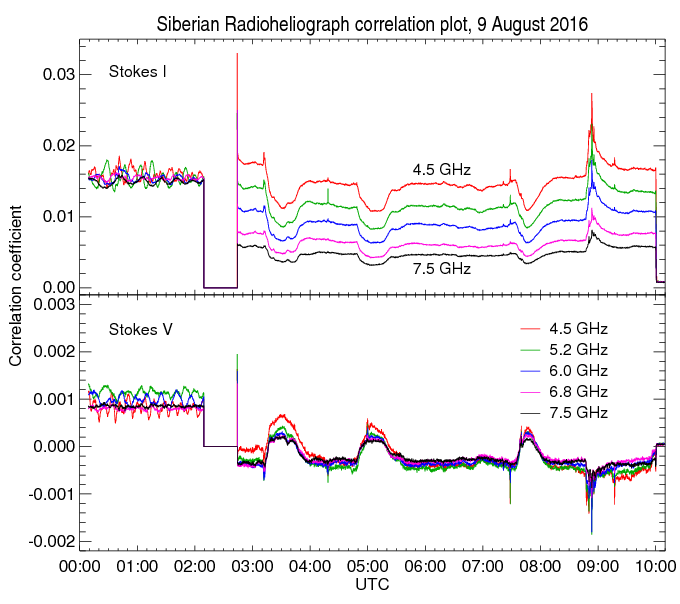 Observations at the first stage of the multiwave Siberian Radioheliograph demonstrate efficiency of design ideas and their accomplishment. The high sensitivity of SRH of about 0.01 sfu combined with a wide dynamic range allows observing the sources of powerful bursts without attenuators. Advantages of SRH are the temporal resolution high enough to study many processes (up to 0.56 s for both polarized components in the single-frequency mode), multi-frequency observations with a tunable frequency set depending on observational program, image synthesis with optimization of required parameters (e.g. spatial resolution or sensitivity), and the absence of geometric distortions from which SSRT images suffered.

SRH allows synthesizing tens of thousands of solar images per day. Expansion of the antenna array up to 96 elements would be the next milestone in upgrading SRH. The spatial resolution of SRH-96 would be as high as 15 arc seconds. Observations with SRH are promising for several studies. In particular, they can shed additional light on the initiation of coronal mass ejections, their propagation up to heights of one to two solar radii, and verification of coronal radio magnetography methods.