Recent SECCHI COR2 observations on board the STEREO-A spacecraft have detected density structures at a distance of 2.5-15 R$_{\odot}$ propagating with periodicity of about 90 minutes (Viall and Vourlidas 2015). The authors suggested that the density structures probably formed in the lower corona. We analyzed radio emission at the frequencies of 8–32 MHz, which correspond to a distance of about 1.5–2.5 R$_{\odot}$ according to the Baumbach-Allen model of coronal electron density. The radio observation allowed us to search for the periodicity source at heights lower than the COR2 FOV. 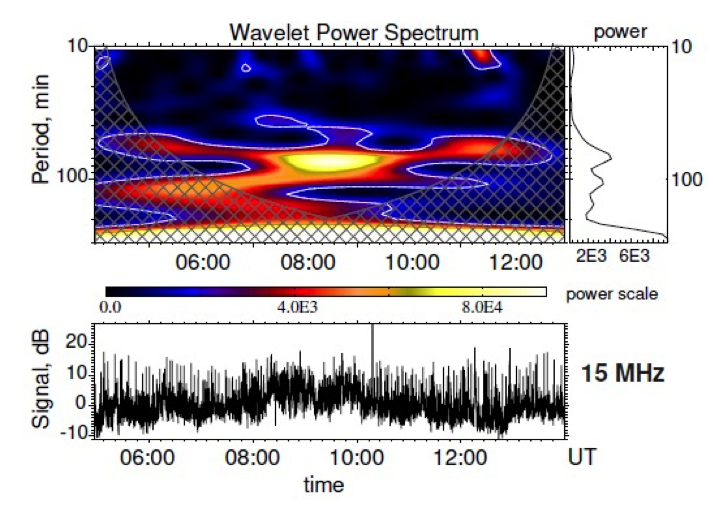 We use a wavelet analysis to find oscillations of the radio emission intensity at four different frequencies: 15 MHz, 20 MHz, 25 MHz, and 30 MHz (Figure 2 displays the wavelet spectrum at 15 MHz). The most powerful period on the wavelet spectrum is located at about 80 min at all frequencies. This periodicity is near the period reported by Viall and Vourlidas (2015) indicating that the phenomena may both have the same source, which is located at least below 2.5 R$_{\odot}$.

Vertically propagating acoustic waves in the stratified atmosphere are described by the Klein-Gordon equation (Kuridze et al. 2009, Afanasyev and Nakariakov 2015), which implies that waves with a frequency that is lower than the certain cut-off value are evanescent. The cut-off frequency of a stratified atmosphere depends on plasma temperature: 1 MK leads to a periodicity of 80 min, while 1.3 MK yields a period of 90 min (Figure 3). Therefore, a realistic coronal temperature may lead to the periodicity found in the radio emission (80 min) and in imaging observations (90 min). 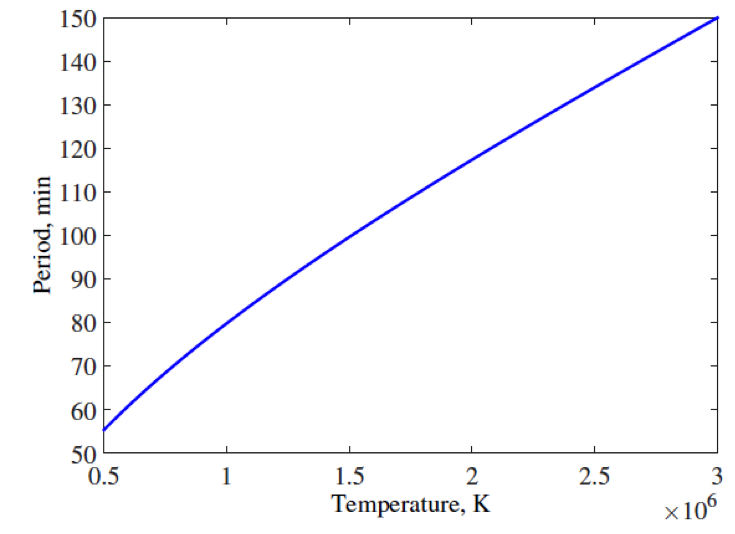 The lower corona is very dynamic with many observed jets, local transients, etc., originating near the chromosphere/transition region. Any velocity or density pulse excited near the coronal base and propagated upwards leaves behind a wake that oscillates at the cut-off frequency. In the case of significant decrease in plasma density, the oscillations may lead to recurrent (or rebound) shocks which propagate upwards with the cut-off period. These quasi-periodic shocks modulate the plasma density and consequently the amplitude of Langmuir waves, which finally lead to the quasi-periodic variations of radio emission. 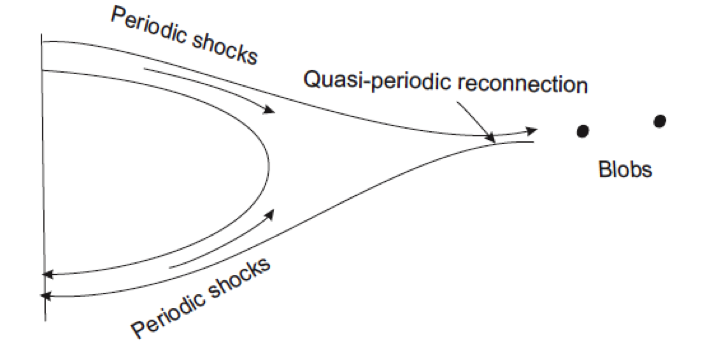 Figure 4. Schematic picture of active region and excitation of quasi-periodic blobs due to recurrent shocks.

Coronal radio emission at 8-32 MHz shows the periodicity of 80 min, which indicates a quasi-periodic variations of coronal density at all heights. The observed periodicity corresponds to the acoustic cut-off frequency of a stratified corona with 1 MK temperature. We suggest that continuous perturbations of the coronal base in the form of jets/explosive events generate acoustic pulses, which propagate upwards and leave behind a wake that oscillates at the coronal cut-off frequency. This wake may generate recurrent shocks due to the density decrease with height, which leads to the observed periodicity in the radio emission. The recurrent shocks may trigger quasi-periodic magnetic reconnection in helmet streamers, where opposite field lines merge (Figure 4) and consequently may generate periodic density structures observed in the solar wind. The oscillation of the solar corona at the acoustic cut-off frequency has important consequences. Firstly, it explains the formation of quasi-periodic density structures in the solar wind. Secondly, the observed oscillations can be used to estimate plasma temperature in the outer corona where remote sensing observations are not achievable. Thirdly, the periodicity can be searched in the radio emission of other stars, which can give the opportunity to estimate their coronal temperatures.

Based on the recent paper by: