We discuss the results of recent observations of a solar U-burst harmonic pair in the frequency range 10-70 MHz, performed by the radio telescope UTR-2 and the recently built first section of the new Giant Ukrainian Radio Telescope (GURT) (see Dorovskyy et al. 2015). A considerably extended frequency range of the new telescope makes the detection of harmonically connected pairs much more probable. In particular, we focus on interpreting the time delay between the harmonic (H) and fundamental (F) components of the burst, which appeared to be as large as 7 s. It’s rather difficult to estimate the F-to-H mutual delay using type III harmonic pairs since they have smooth spectra lacking any specific “reference markers”. U-bursts [see also previous CESRA nugget on N and U bursts] do have such reference markers – the U-bursts turnover points. The explanation of the delay is based on the difference of group velocities of H and F waves during their travel inside a high, hot and dense coronal loop.

Description of the experiment

The discussed U-bursts harmonic pair was observed on 8 August 2012 by one section of the GURT, being currently built near the existing radio telescope UTR-2 (Kharkov, Ukraine). The section is a square active antenna array consisting of 5 rows and 5 columns oriented along the East-West and North-South directions, respectively, or 5 x 5 cross-dipoles (Figure 1). The individual dipoles are spaced by 3.75 m from each other along both rows and columns. All dipoles are mounted at 1.6 m above the ground and oriented at 45º to the meridian. 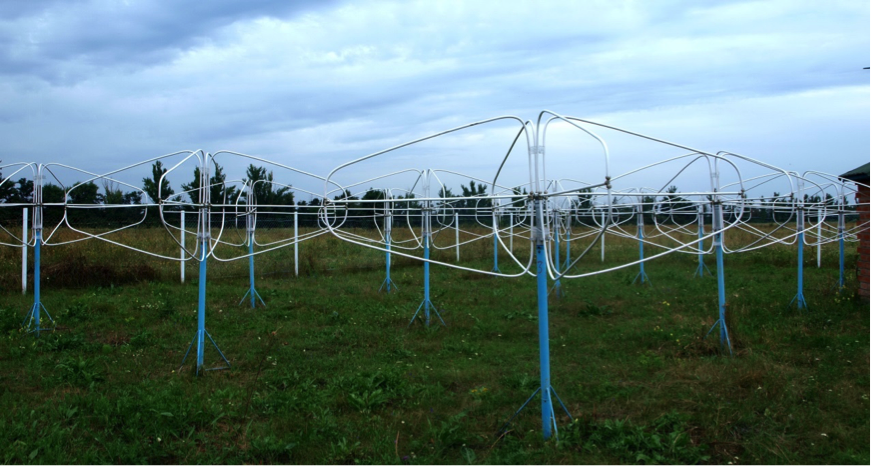 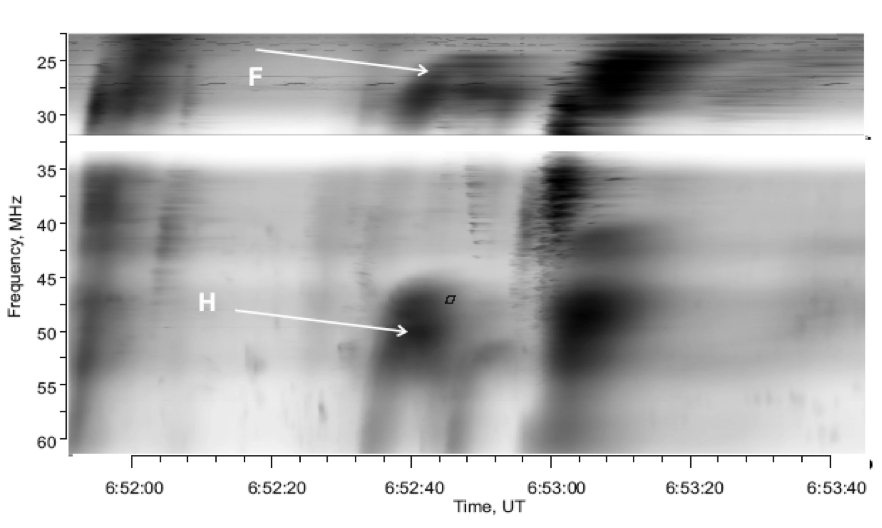 Figure 2. The dynamic spectrum of the fundamental (F) and the harmonic (H) components of the U-burst recorded on 8 August 2012

The dynamic spectrum of the discussed U-bursts pair is shown in Figure 2. The parameters of the recorded U-burst harmonic pair are show in the Table 1. All of these parameters are in favor of a harmonic relation between the components. The most interesting fact needing an additional explanation is the time delay of the fundamental emission which equals 6.9 s.

Table 1. Parameters of the U-burst components

In our opinion, the observed delay between the turning points of the fundamental and harmonic components of the U-burst was determined by the difference in their group velocities while they travel inside a magnetic loop containing plasma of increased density and temperature. The loop which may be associated with the burst was observed by STEREO/COR2-A coronagraph.

Analyzing the daily Sun charts and sunspots and their magnetic fields for that date and also using the magnetic field extrapolation technique available at the SDO website, we can reasonably suppose the existence of magnetic field lines connecting active region NOAA11537 with NOAA11538 either NOAA11540 forming corresponding coronal loops. At the same time, it is known that coronal loops with heights of several solar radii are closely connected with solar transient events, such as CMEs. We assume that the observed high coronal loops could arise due to a CME which appeared in LASCO-C2 field of view about 5:48 UT according to SOHO-LASCO CME catalog [see also the previous CESRA nugget] To fit the observed U-bursts turnover frequencies and the apparent loop height, we suppose that the loop should hold plasma of increased density in comparison with ambient corona. Dense plasma inside the loop means that the time delay is formed while both F and H waves travel from the source to the loop boundary along the line of sight because outside the loop, the group velocities of both waves are all close to the speed of light.

We suppose that plasma confined by the magnetic field inside the loop follows the barometric density distribution (aka Boltzmann equation for density), like it was done, for example, by Mann et al. (1999). Also we assume constant plasma temperature all over the loop.

In general, the time needed for the electromagnetic wave to travel from the source to the loop boundary can be calculated as

From equations (2) and (3) it is clearly seen that the higher loops contain colder plasma and vice versa. Knowing one of these parameters, we can define another one if the time delay between the F and H components is given. From the STEREO/COR2-A the height of the associated loop is roughly equal to 4.5\(R_S\) . Assuming \(v_0>>0.3c\), we can estimate the temperature inside this loop to be equal to ~3.2·106 K. Under the obtained conditions, the plasma inside this loop should be about 20 times denser than the ambient coronal plasma.

During the first observations performed by the new radio telescope GURT, a U-burst harmonic pair with abnormally large relative time shift was registered. It was shown that the delay of about 7 s cannot be achieved using existing models and standard coronal parameters. In our opinion, the above delay arises due to the different group velocities of the pair components when they move across the magnetic loop towards the observer. The essential property of the proposed model is that the temperature and density of the plasma held by the coronal loop are much higher than those of the surrounding corona. As long as the frequency of the fundamental component at the generation point is close to the local plasma frequency, its group velocity is much less than that of the harmonic one. Thus while traveling across the loop, the fundamental component lags. Using the value of the time delay of the fundamental component in the U-burst harmonic pair, we can detect the plasma temperature of the corresponding loop plasma. For the given harmonic pair, the temperature inside the loop may reach several million degrees.