We present a method newly developed at the Astrophysikalisches Institut Potsdam (AIP) for determining the structure and the strength of coronal magnetic fields during the late phase of solar flares.

Fiber bursts are a spectral fine structure occuring in some type IV radio burst continua. Here we assume that the fiber bursts are excited by whistler waves and their interaction with nonthermal electrons trapped in a magnetic loop. The model is referenced in detail in the full paper (Aurass, H., Rausche, G., Mann, G., Hofmann, A.: Astron. Astrophys. 435, 1137, 2005). It is important to know that the whistler waves propagate dominantly parallel to the magnetic field under coronal conditions.

From the radio spectrum (first image, right panel) we derive the frequency drift rate and the instantaneous bandwidth of fiber bursts. Applying the whistler wave dispersion law we find from the spectral data an estimate of the magnetic field strength in the fiber burst source volume.

From the radio images we must find the 2D fiber burst source sites at least at 2 frequencies, in projection on the solar disc. From the SOHO-MDI magnetogram we compute the (potential or force-free) extrapolation of the magnetic field in the corona.

Comparing the 3D set of extrapolated field lines with the radio images of the fiber bursts a subset of field lines is selected, crossing the radio source at the Nancay imaging frequencies (first image, left panel). Next, we change the density model – and thus vary the height of a given observing frequency – until we obtain the best coincidence of the field strength derived from the “fiber burst source fieldlines” and from the spectral data (independently). 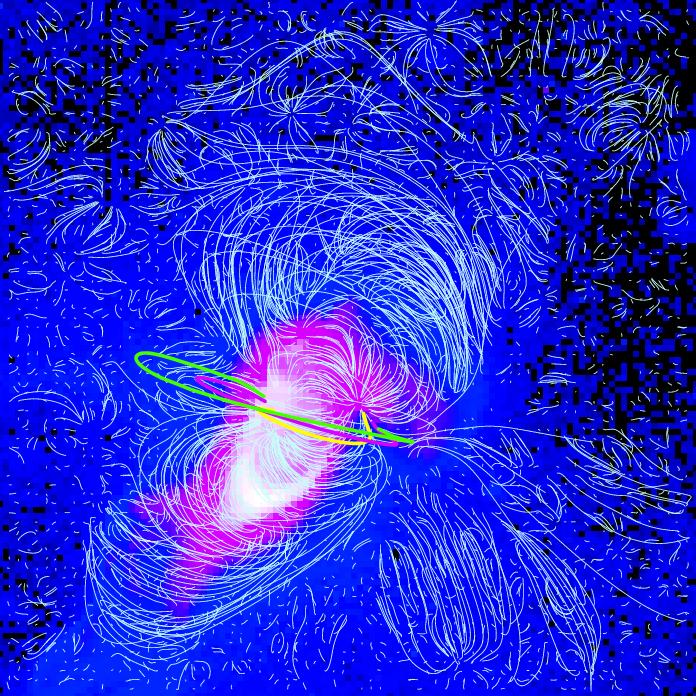 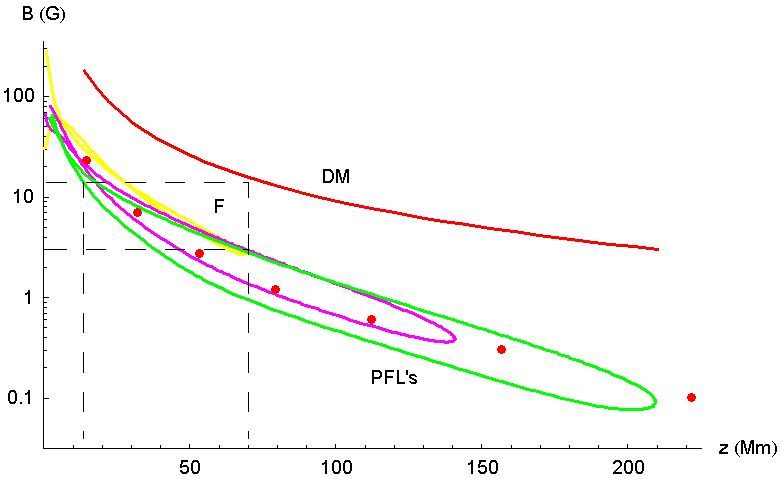 For comparison, we give here the widely accepted model of the active region coronal magnetic field (‘DM’) after Dulk and McLean (Solar Phys. 57, 279, 1978). For the analyzed event, the field strength in postflare loops is roughly one order of magnitude lower than the model field strength. As a confirmation of the results we can reconstruct from the selected activated field regions the spreading speed of the postflare loop footpoints, which is in agreement with the independent measurements from the soft X-ray and Ultra-Violet coronal images (Yohkoh and SOHO spacecrafts).

According to our knowledge this result is the first direct measurement of coronal magnetic fields underneath an erupting flux rope and it is relevant for flare models and for diagnostics of coronal loops by MHD waves.