Our understanding of sunspots is far from complete despite intensive research over hundreds of years. Radiation at submillimeter and millimeter wavelengths is formed in local thermodynamic equilibrium (LTE) in the low to mid chromosphere, and its intensity depends linearly on the ambient temperature of the medium. Observations at these wavelengths thus provide important diagnostics of sunspot chromospheres (Loukitcheva et al. 2014). The largest radio telescope in the world, the Atacama Large Millimeter/Submillimeter Array (ALMA), which started scientific solar observations in 2016, provides high-resolution observations at mm wavelengths that can resolve and isolate structures within a sunspot (umbra and penumbra), allowing us to test models for the chromospheres of such features. Using ALMA Science Verification data from 2015, we compare ALMA observations of a sunspot at two mm wavelengths with the predictions of sunspot umbral and penumbral models.

The first ALMA observations of sunspots demonstrate that the sunspot umbra exhibits a radically different appearance at 1.3 mm and 3 mm, whereas the penumbral brightness structure is found to be similar at the two wavelengths (Fig.1). Analyzing the same sunspot observations at 3 mm, Iwai et al. (2017) report the discovery of a brightness enhancement of ~800 K in the center of the umbra. In this work we find that, on average, the inner part of the umbra is ~600 K brighter than the surrounding quiet Sun (QS) at 3 mm whereas the coolest part of the sunspot is at 1.3 mm, being ~700 K cooler than the QS. The ALMA observations have also resolved the penumbral structure at mm wavelengths. At 1.3 mm the penumbra is brighter than the QS and its brightness increases towards the outer boundary. At 3 mm the inner part of the penumbra is cooler than the QS, but gets brighter towards the outer boundary.

Figure 1. Left panel: ALMA images of AR12470 at 3 and 1.3 mm, obtained on 2015-12-16 and 2015-12-18, respectively. Right panel: Observed profiles of the mm brightness (blue) and of the longitudinal magnetic field measured by SDO/HMI (red) for horizontal (a),(c) and vertical (b),(d) cuts through the sunspot at 3 and 1.3 mm, respectively. Solid and dashed black lines indicate the positions of umbral and penumbral boundaries along the cuts. 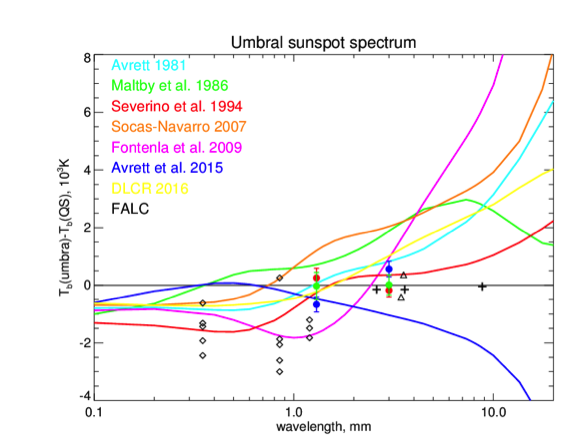 Figure 2. Comparison between modelled and measured umbral brightness, plotted as difference between the umbral brightness (in temperature units) and the QS brightness. Colored circles with error bars indicate the ALMA mean values for the inner umbra (blue), outer umbra (red), and the whole umbra (green). Triangles mark the observational values obtained from BIMA maps by Loukitcheva et a. (2014). Diamonds stand for the measurements from JCMT made by Lindsey & Kopp (1995). Pluses indicate the measurements from the Nobeyama 45-m telescope obtained by Iwai & Shimojo (2015), and from the NoRH by Iwai et al. (2016). From Loukitcheva et al. (2017). 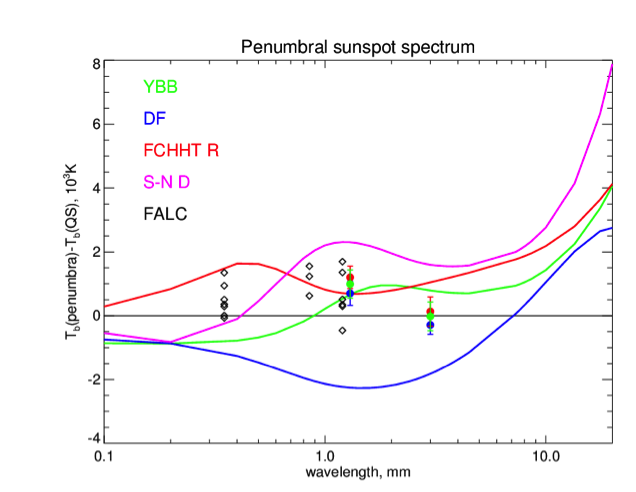 Among the tested umbral models that of Severino et al. (1994) provides the best fit to the observational data, both for the ALMA data analyzed in this work and data from other sources analyzed in earlier works. The values and the slope of the model brightness spectrum are close, although not identical, to the observed brightness temperatures and their gradient at ALMA wavelengths, which implies that the chromospheric temperature gradient in the model is in reasonable agreement with the ALMA observations. According to this model, the bulk of the emission at 1.3 and 3 mm comes from the heights of ~1100 km and 1500 km in the umbral chromosphere, respectively. No penumbral model gives a really satisfactory fit to the currently available measurements. The two models, YBB and FCHHT R, that come closest to being consistent with the data are quite distinct in both their thermal profile and the heights at which the 1.3 mm and 3 mm radiation is emitted.

For the first time, millimeter observations of sunspots have resolved umbral/penumbral brightness structure at the chromospheric heights. Previous sunspot observations (with BIMA and NoRH) at mm wavelengths were carried out with a resolution of around 10′′, which was insufficient to clearly resolve the umbra within the sunspot. For a definite determination of the temperature gradient in the solar chromosphere and thus for a precise formulation of the requirements for a successful chromospheric model, additional ALMA sunspot observations are required. ALMA observations at multiple mm wavelengths can be used not only to test existing sunspot models, but can also serve as an important constraint on any new empirical models. We look forward to the use of ALMA Bands 4 and 5, which lie between 1.3 and 3 mm, as well as wavelengths shorter than 1.3 mm for observations of the Sun that can address these issues.

This paper makes use of the following ALMA data: ADS/JAO.ALMA#2011.0.00020.SV. ALMA is a partnership of ESO (representing its member states), NSF (USA) and NINS (Japan), together with NRC (Canada), MOST and ASIAA (Taiwan), and KASI (Republic of Korea), in cooperation with the Republic of Chile. The Joint ALMA Observatory is operated by ESO, AUI/NRAO and NAOJ.