We used the automated Coronal Pulse Identification and Tracking Algorithm (CorPITA; Long et al., 2014) in this work. This code identifies the global wave in a series of 360 arc sectors, using a quality rating system to quantify the detection and allowing its temporal evolution to be studied; this is shown in panels a and b of Figure 1. CorPITA was applied to a list of 410 global waves previously identified by Nitta et al. (2013) to investigate their statistical relationship with other solar phenomena. We found that of the 362 wave events that could be processed by CorPITA (due to the requirements of the algorithm), 164 were classed as global waves by CorPITA with no waves found for the remaining 198 events. 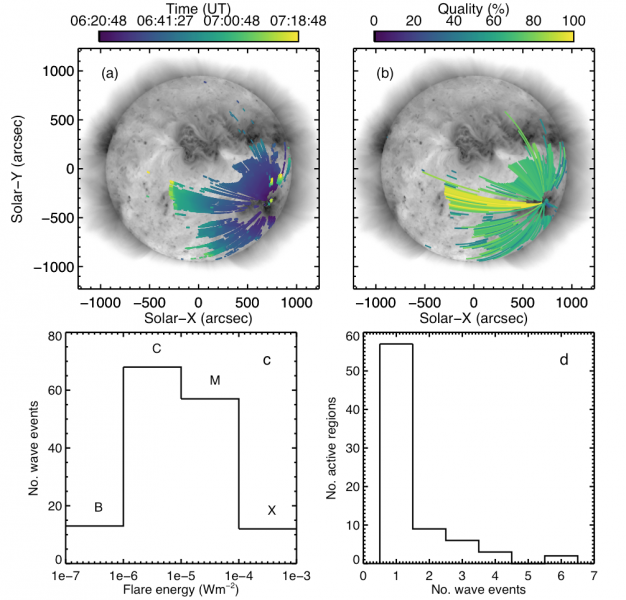 Figure 1. Panel a shows the temporal evolution of the global wave associated with the solar eruption on 7 June 2011 derived using the CorPITA code with colour showing time since 06:20:48 UT. Panel b shows the associated quality rating of each arc sector. Panel c shows the number of waves associated with different flare classes, while panel d shows the relationship between active regions and global waves. Figure modified from Figures 1 and 4 of Long et al. (2017).

No clear relationship was found between the studied waves and associated CMEs as classified using the CDAW LASCO catalogue. However, this is most likely because the associated CMEs would have been travelling towards the observer, making them difficult to identify and correctly analyse. Similarly, only a small subset of the waves studied were found to have associated solar energetic particles as identified using the Wind spacecraft.

We used an automated technique to perform a purely statistical analysis of the relationship between global waves and other solar phenomena. Although no clear statistical relationship was found between the different features studied, there were some interesting findings. 25% of active regions studied produced more than one global wave while transiting the solar disk while there was no clear relationship between flare class and global waves. Similarly, no relationship was found between the speed of the wave and the existence of a type II radio burst. These results suggest that the structure of the erupting active region and its relationship to the surrounding coronal magnetic field may be more important for determining the presence of a global wave than the amount of free energy available.

Note that the catalogue produced as part of this work is freely available associated with the online version of the published paper.