Quantifying how coronal mass ejections (CMEs), particularly fast ones, propagate from the Sun to the Earth is an overarching issue in CME research and space weather forecasting. A typical fast CME would finish its major deceleration well before reaching 1 AU (Liu et al. 2013). The actual situation of CME Sun-to-Earth propagation, however, may involve interactions with the highly structured solar wind including other CMEs. Interactions involving more than two CMEs can take place in the Sun-Earth space (e.g., Liu et al. 2012), because the typical transit time from the Sun to 1 AU is a few days, during which many eruptions could occur.

In the absence of wide-angle heliospheric imaging observations, a long-duration type II radio burst may provide a useful means to investigate the Sun-to-Earth dynamics of a CME/shock. The propagation distance of a CME/shock can be derived from the frequency drift of the associated type II burst. Type II emissions are also used to study CME-CME interactions, a typical signature of which is an increase in the bandwidth and intensity of the type II burst (Gopalswamy et al. 2001). It is still unclear how type II burst behaviors are connected with the characteristics of CME Sun-to-Earth propagation. This study attempts to address this critical question by combining coordinated coronagraph, radio and multi-point in situ observations for three successive CMEs.

We use a simple analytical model to characterize the shock propagation. The shock is assumed to start with an initial speed near the Sun, move with a constant deceleration before reaching 1 AU, and thereafter travel with a constant speed. The initial speed is derived with a graduated cylindrical shell method that removes projection effects (Thernisien et al. 2006). The shock transit time and speed are known from in situ measurements at 1 AU. The whole propagation profile can then be uniquely set without any free parameters. The distances from the analytical approach are converted to frequencies using the density model of Leblanc et al. (1998). The resulting frequency-time profile is consistent with the observed type II band over essentially the whole Sun-to-Earth time range (see Figure 1). 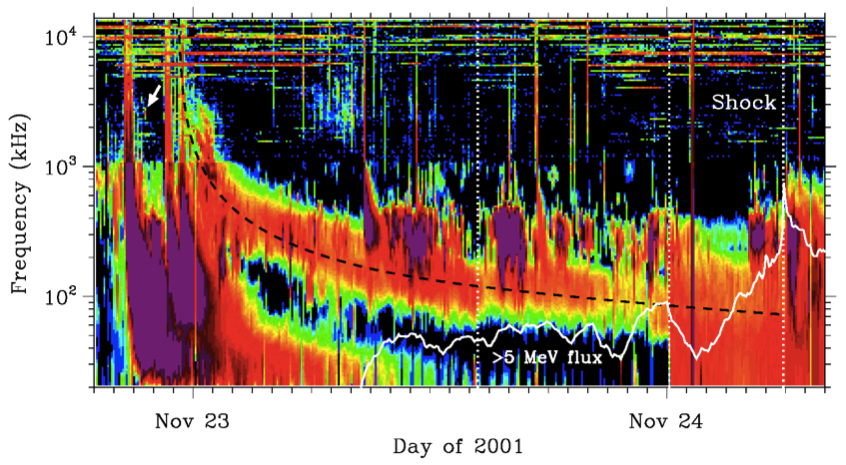 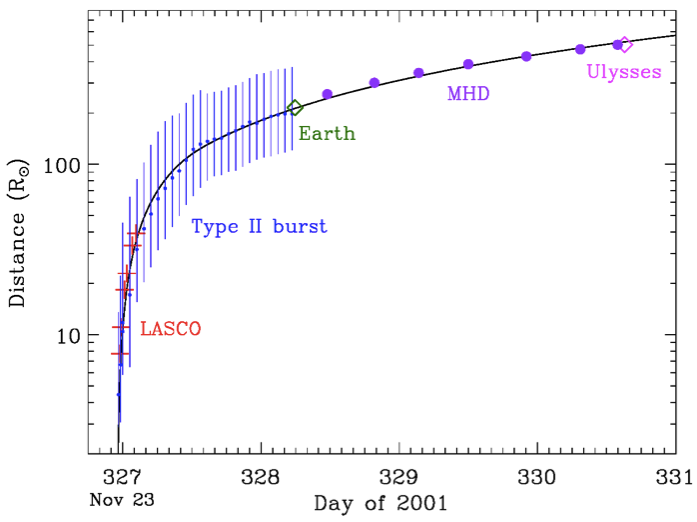 Figure 2. Overall shock propagation profile from the Sun far into interplanetary space determined from the analytical model (black solid curve). Between the Earth and Ulysses are the shock arrival times at 1.2, 1.4, 1.6, 1.8, 2.0, 2.2, and 2.34 AU given by MHD propagation of the solar wind disturbances observed at 1 AU.

The long-duration type II burst provides key features for resolving the propagation and interaction complexities of the three successive CMEs. CME2 and CME3 interacted first and then overtook CME1 at a distance of about 0.85 AU from the Sun. We are able to determine the timescale that the shock from CME3 spent inside CME2 and CME1 using the type II features, which is about 14 and 6 hr, respectively. The work presents a simple analytical model without any free parameters to characterize the whole Sun-to-Earth propagation of fast CME-driven shocks. The model shows a remarkable consistency with all the available data and MHD simulations even out to the distance of Ulysses (2.34 AU) in the current case.