Recently, oscillations were recognized in the global X–ray flux detected during the 18 April 2014 M7.3 flare by the Fermi/GBM instrument as well as in the spatially localized UV measurements of the IRIS satellite and the EIS/Hinode instruments (Brosius and Daw, 2015, Brosius, Dawn and Inglis, 2016, and Brannon, Longcope, and Qiu, 2015). Radio observations of this flare were also analyzed by Carley, Vilmer, and Gallagher (2016).

All these radio full–disk flux curves reveal a quasi–periodic behavior with peaks that are more or less synchronized in general (Figure 1). Nevertheless, their time coincidence with the EIS and IRIS peaks is in some cases good and in others not so good. We think that this is due to the radio spectrum being a whole–disk record consisting of all bursts at any location. 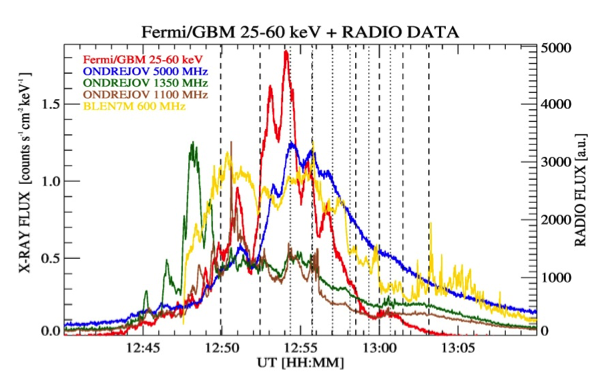 Figure 1. Global overview of the 18 April 2014 solar flare: Fermi/GBM 26 – 50 keV light curve and the radio fluxes at 5000, 1350, 1100, and 600 MHz. The vertical dotted lines designate times of the EIS emission peaks and the vertical dashed lines show times of the IRIS emission peaks (for exact time and spatial location information on these peaks see Brosius, Daw, and Inglis, 2016, and Brosius and Daw, 2015).

Newly developed types of map of oscillations based on the wavelet transform analysis of radio spectra (Karlicky and Rybak, 2017) were constructed in a attempt to detect possible oscillations present in radio emission and to compare them with the oscillations detected in X–rays and in the UV spectroscopic observations.

Here, we present an interesting result derived from the oscillation maps for the 800–2000 MHz radiospectrogram: there exist oscillations for intervals of periods at the same time, namely in intervals 10–30, 30–50, and 65–115 seconds (Figure 2). This confirms that the processes generating the DPS are multi–scale and multi–periodic. Moreover, the phase of most of the oscillations is nearly synchronized (within a few seconds). 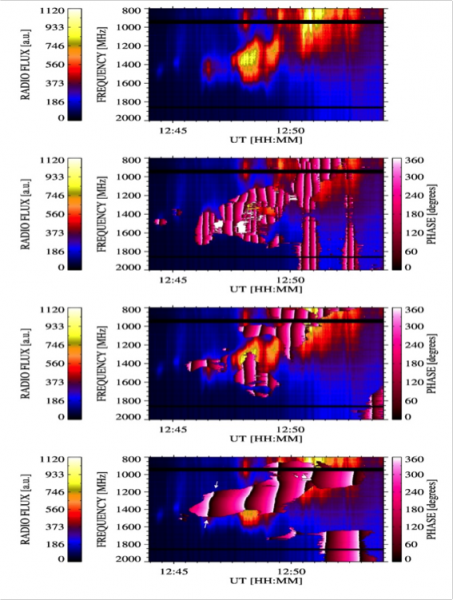 However, an interesting aspect is that the zero phase (black line) with the period interval 65–115 seconds drifts from a frequency of about 1500 MHz to 1200 MHz in the time interval from 12:46:30 – 12:46:40 UT (Figure 2, bottom part, see the white arrows). The frequency drift is about −30 MHz/s, which corresponds to velocities of about 500 km/s and 1300 km/s in the Aschwanden and the 10.5 × Aschwanden density models, respectively, where we use also the correction to the enhanced density in the plasmoid. We propose that this drift indicates the presence of a fast magnetoacoustic wave propagating upwards in the solar atmosphere.

We find that the 18 April 2014 M7.3 flare event as a whole has a quasi–periodic character in the 65–115 seconds period interval. This quasi–periodic behavior is recognized also in radio waves over a broad range of frequencies. The phases of these 65–115 seconds oscillations are nearly synchronized (within a few seconds) over a very broad range of frequencies. We explain this synchronization by fast electron beams (type III bursts) propagating through the solar corona, the acceleration of which is modulated by a wave or an oscillation process with a period in the 65–115 seconds interval. However, at the very beginning of the flare at the time of the plasmoid formation (expressed in radio as the DPS), in the phase map with the 65–115 seconds period, we find a negative drift of the phase which shows a propagating wave. We propose that this wave is the fast magnetoacoustic wave propagating from the plasmoid site upwards.