Large-scale magnetic structures, which likely make a “bridge” between the relatively compact particle acceleration site of a flare energy release and the interplanetary medium, are of particular importance because of their potential role as an “escape route” for solar energetic particles (SEPs). Although these escape routes can sometimes be associated with jets visible in extreme ultraviolet (EUV) and/or soft X-rays (SXRs), the jet plasma must be dense enough to be detected in either EUV or SXR ranges; if tenuous, such escape routes can be undetectable for EUV and SXR instruments. Here the microwave data can help greatly, given that even a relatively low density of nonthermal electrons can render a magnetized volume filled with these particles optically thick at relatively low frequencies and, thus, bright enough to dominate the spectrum. In the optically thick case the brightness temperature from a given LOS is defined by “effective” energy $\langle E \rangle$ of the electrons responsible for emission at the given frequency, $T_{B}=T_{eff}\equiv \langle E \rangle / k_B$, where $k_B$ is the Boltzmann constant. In the Rayleigh-Jeans regime, always valid in the radio domain, the flux density of the optically thick emission is fully specified by three variables: emission frequency $f$, effective (or brightness) temperature $T_{eff}$, and the source area $A$: $F\propto (k_B f^2/c^2) \int T_{B} d \Omega \propto f^2 T_{eff} A$, which can conveniently be written for the solar case as

This immediately tells us that having a large flux density of low-frequency radio emission implies a correspondingly large source area. For example, having a similar flux density at 10 GHz and 1 GHz, which is often observed in large flares (Lee et al. 1994) and even in modest flares (Fleishman et al. 2016), requires that the area at 1 GHz is a factor of 100 larger than at 10 GHz, other conditions being equal. This implies that the low-frequency microwave gyrosynchrotron emission can effectively be used to probe large-scale structures associated with flares in the solar corona, which hitherto have been largely unrecognized, but which may play an essential role in SEP production. 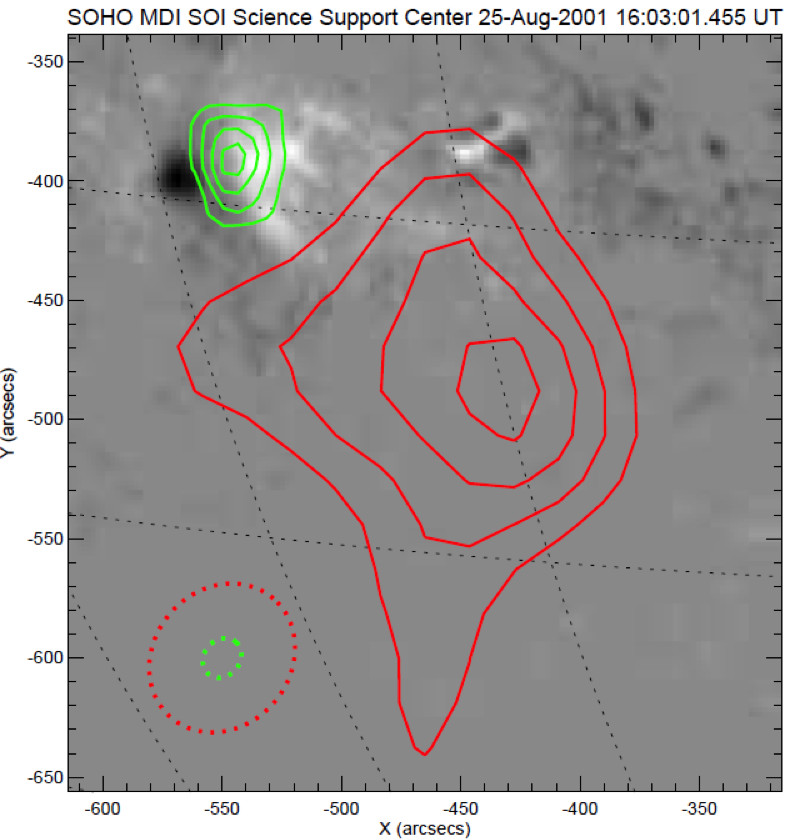 Figure 1. Preflare line-of-sight SOHO/MDI magnetogram (16:03:01 UT) and OVSA snapshot ($\sim$16:32:31~UT) images at 6.2 GHz (green) and 1.2–2 GHz frequency synthesis (red). Dotted ovals show the OVSA beams at the corresponding frequencies. The animated version of the figure (Movie 1 below) shows the evolution of the radio sources over the impulsive peak of the burst. Note very fast apparent motion of the low-frequency source compared with the high-frequency source, which stays at roughly same location all the time.

In our recent paper we consider a strong X5.3 flare that occurred on 25 Aug 2001, which has an exceptionally broad spectral coverage in the radio domain, 1–405 GHz. We analyze the radio emission from the impulsive phase of this flare (Figure 1) with an emphasis on the low-frequency emission, employing both imaging from Owens Valley Solar Array (OVSA) and 3D modeling with GX Simulator (Nita et al. 2015). We find that the low-frequency radio emission comes from a large-scale “plume” associated with the flare, which may serve as an SEP escape route that does not show up in other wavelengths, because the physical parameters that allow the plume to be bright at the low radio frequencies also leave it undetectable at other wavelengths.

Figure 2. A composite view of the 3D model developed for the flare. Left: the field lines visualizing three model flux tubes labeled 1, 2, and 3. In each case, the red line shows a corresponding central (reference) field line, while the red circles represent the reference cross-sectional areas of the flux tubes. Closed field lines are shown in green, while the open ones—in yellow. The bottom image is the SOHO/MDI LOS magnetogram. Right: the same model, where the spatial distributions of nonthermal electrons in all the flux tubes are shown by the dark-blue and black volume. The inset shows synthetic model radio spectrum (thick solid line) and its components and the observed broad-band radio spectrum (asterisks).

The combination of the microwave data and 3D modeling (Figure 2) offers an apparently unexpected conclusion about the spatial structure of the magnetic flux tubes involved in the 2001-Aug-25 flaring event: in addition to relatively compact structures seen in high-frequency microwave and sub-THz emission, as well as in WL, EUV, SXR, and HXR, there exists a large-scale plume seen only at low radio frequencies. The reason for the plume being undetectable at most of the wavelengths is fully understandable: the number density of the thermal plasma in the plume volume is very low, not higher than $\sim10^8$ cm$^{-3}$; otherwise, the low-frequency radio emission would be strongly suppressed by the Razin-effect, given that the magnetic field in the plume is very low. But by the same token, neither EUV nor X-ray emission would be observable, given that they are proportional to the square of the density. The high-frequency radio emission from the plume is also expected to be negligible, given its relatively low magnetic field. At the same time, the optically thick low-frequency gyrosynchrotron emission has a large brightness in case of the weak magnetic field; so the very combination of parameters that makes it invisible at high frequencies is favorable for the plume to dominate at low frequencies.

Having microwave imaging observations at low frequencies is critically important, and, perhaps, the only means for detection and quantitative analysis of large-scale structures like the plume described here, which contains a vast number of nonthermal particles, and thus is energetically important. This large reservoir of nonthermal electrons can supply the space with SEPs both directly and as a seed population for additional SEP acceleration by an eruption such as a coronal mass ejection.

The 3D models developed for this study are available at http://www.ioffe.ru/LEA/SF_AR/models/3dmodels.html