We study the quasi-periodic pulsations (QPPs) of nonthermal emission in an M7.7 class flare on 2012 July 19 with spatially resolved observations at microwave and HXR bands and with spectral observations at decimetric, metric waves. Microwave emission at 17 GHz of two footpoints, HXR emission at 20–50 keV of the north footpoint and loop top, and type III bursts at 0.7–3 GHz show prominent in-phase oscillations at 270$\,$s. Through the estimation of plasma density around the loop top from EUV observations, we find that the local plasma frequency would be 1.5 GHz or even higher. Thus, type III bursts at 700 MHz originate above the loop top. Quasi-periodic acceleration or injection of energetic electrons is proposed to dominate these in-phase QPPs of nonthermal emission from footpoints, loop top, and above. In the overlying region, drifting pulsations (DPS) at 200–600 MHz oscillate at a distinct period (200$\,$s). Its global structure drifts toward lower frequency, which is closely related to upward plasmoids observed simultaneously from EUV emission. Two individual systems of quasi-periodic acceleration of electrons are proposed to coincide in the bi-direction outflows from the reconnection region.

The flaring loop structure could be determined by a microwave observation, which evolves in three phases. QPPs appear at the second phase with intensive emission from loop legs and weak emission around LT (as seen in Figure 1). We analyze the fluxes of selected regions in the flaring loop and find that the emissions of FPs and region S1 have oscillations at 270$\,$s. The loop legs have smoother light curves but stronger emission.

Figure 1. Microwave images at 17 and 34 GHz during the flare process.

The HXR emissions observed by RHESSI have two FPs and an LT. The emission of LT at 10–20 keV is increased continuously, which is thermal emission, reflecting the heating of local plasma by injected energetic electrons. The one at 20–30 keV, increasing with oscillatory peaks at 270$\,$s, is a mixture of thermal and nonthermal emission. The nonthermal emission at 30–50 keV of LT and NFP shows obvious oscillation at a period of 270$\,$s.

From spectral observations (Figure 3), quasi-periodic type III bursts with periods of 270$\,$s cover a wide range at 0.7–3 GHz. The individual type III burst drifts toward high frequency, which indicates a downward movement of energetic electron beams. The local plasma frequency near LT is estimated at about 1.5 GHz or even higher frequency. This indicates that the emission of type III bursts at lower frequency originated from above LT and energetic electrons, oscillating at 270$\,$s, transport downward from the acceleration site to LT, loop legs, and FPs. The well-related fluxes between type III bursts and HXR LT and NFP suggest a common origin between them. DPS at 200–600 MHz, occurring simultaneously with an upward plasmoid at high altitude, have an oscillating period of 200$\,$s. The similarity of the velocity of DPS source and plasmoids indicates that they are closely related to each other. It means that the energetic electrons in plasmoids oscillate at a distinct period. 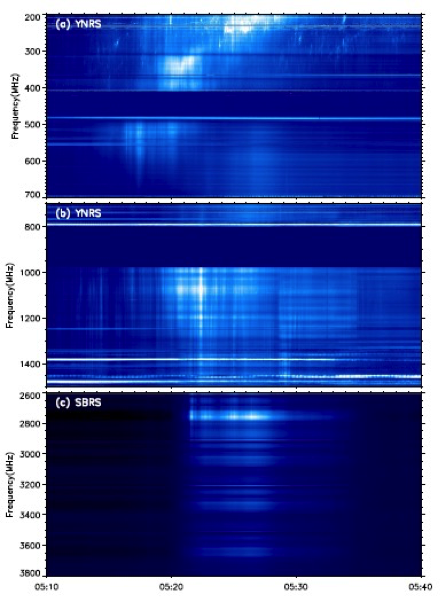 Figure 3. Decimetric and metric spectra observed by SBRS and YNRS

Liu et al. (2013) found bi-direction outflows originating between an erupting flux rope and underlying flare loops. They suggested that the primary loci of particle acceleration and plasma heating are in the reconnection outflow regions, rather than the reconnection site itself. Our results are consistent with the above result and obtain further evidence of different oscillatory periods of these two acceleration processes. The oscillatory energetic electrons produced by quasi-periodic acceleration at 270$\,$s in downward outflows is responsible for nonthermal emission in the underlying flare loop, and the quasi-periodic acceleration of electrons at 200$\,$s in upward plasmoids generates DPS in the overlying region.

Two individual processes of acceleration are proposed to take place at different locations out of the reconnection site. The electrons quasi-periodically accelerated at 270$\,$s in downward outflows generate in-phase oscillations of HXR LT and type III bursts. Furthermore, the ones precipitating directly to FPs, partial of injected ones, emit quasi-periodic microwave and HXR emission there. In upward plasmoids, electrons are quasi-periodically accelerated at 200$\,$s, which subsequently produces an oscillatory DPS. The outflows from the reconnection site disturb the local plasma and generate MHD oscillations, which modulates the acceleration process. The different conditions in local plasma would result in distinct periods.