Figure 1. Radio spectrum observed during the 2015 November 4 flare by the Ondřejov radiospectrograph. The arrow shows the SPDB.

Figure 1 shows the 800 – 2000 MHz radio spectrum of the M3.7 flare observed on 2015-Nov-04 by the Ondřejov radiospectrograph. In this radio spectrum a very rare slowly positively drifting burst (SPDB) can be seen. It started at 1300 MHz at 13:40:24 UT and drifted towards higher frequencies with frequency drift of about 115 MHz s-1. The SPDB was observed during the impulsive phase of the flare, close to the maximum peak of GOES soft X-rays derivatives. We used data from several instruments (SDO/AIA, Hinode/XRT, IRIS, MSDP/Bialkow). We analysed these to find any observable EUV signatures associated with the SPDB. Figure 2 contains images from AIA 131 Å and 304 Å filters, combined with one panel observed in XRT Be_med filter. We observed a bright plasma blob (white arrows) falling along the dark loop structure (yellow arrow) within the bright flare arcade. Simultaneous observations in AIA 131 Å and XRT Be_med filters point to a hot component within the blob, likely with log(T [K]) ≥ 6.9. The colder emission in AIA 304 Å filter is dominated by optically thick He II Lyα line at 303.8 Å formed at around log(T [K]) ≈ 4.9 (Del Zanna et al. 2015). The blob was observed in all AIA coronal wavelengths and also in IRIS Si IV 1400 Å images indicating a strongly multi-thermal character. The fall velocity of the EUV blob was about 280 km s-1. An interaction of this falling blob with the chromosphere caused a sudden change of the Hα line spectrum, which shows a strong plasma heating and enhanced plasma velocities. 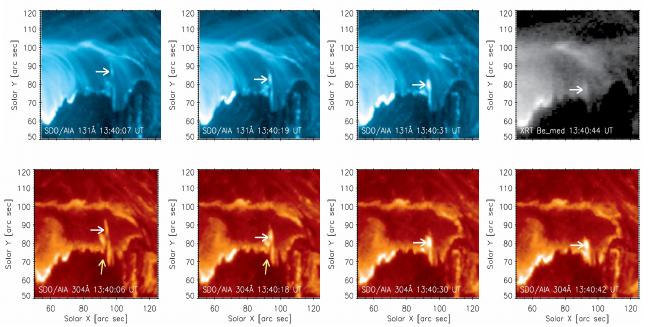 The slowly positively drifting burst (SPDB) was observed at the beginning of solar flare and its drift (115 MHz s-1) was much smaller than that of type III bursts in the same frequency range. Thus, SPDB has to be generated by a very slowly moving agent. We found that the fall velocity of the EUV blob (280 km s-1) corresponds to the sound velocity at studied EUV structures. Combining observational facts and different possible interpretations we propose that SPDB was generated by the thermal conduction front formed in front of the falling bright blob.