During solar flares, electrons are accelerated up to relativistic speeds. As they propagate upwards through the solar corona, they produce so-called type III radio bursts. These type III bursts often demonstrate fine structure, with their spectra consisting of multiple narrowband “striae”; most likely, these structures are caused by small-scale density inhomogeneities of the coronal plasma so that the subsequent fundamental plasma processes that produce the radio bursts is produced in small localized regions (e.g. Takakura & Yousef, 1975; Melrose & Goldman, 1987; Kontar, 2001).

Using one of the largest radio telescopes, the LOw Frequency ARray (LOFAR, van Haarlem et al. 2013), we have estimated the source sizes and locations of the fine frequency structures in the solar radio burst. Utilizing high time resolution (~10 ms) and frequency resolution (12 kHz), we have also determined the location and size of the radio emission source (Figure 1) and its evolution with time, allowing us to track how the radio emission propagates through the solar corona. 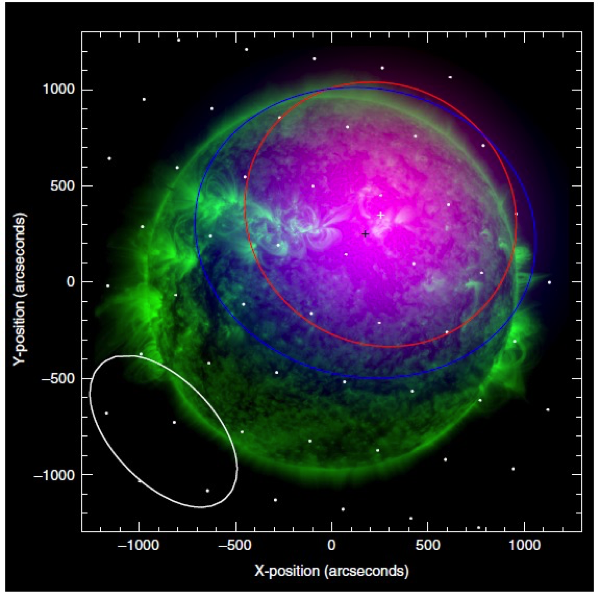 The same event was simultaneously observed (without angular resolution) by the Ukrainian Radio interferometer of National Academy of Sciences (URAN-2, Konovalenko et al. 2016). 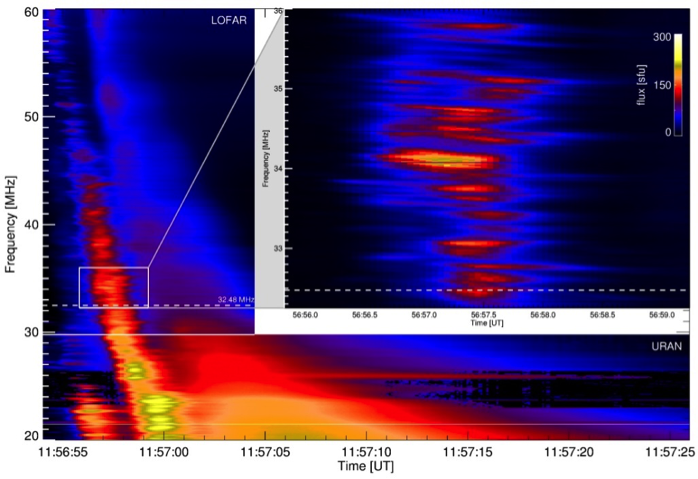 Figure 2. Composite dynamic spectrum of the type III solar radio burst observed on 16 April 2015 with both LOFAR (at higher frequencies) and URAN-2 (at lower frequencies). The insert shows an expanded view of a 3-second interval with multiple fine-structured striae.

Figure 2 shows the dynamic spectrum of one of the type III bursts, which demonstrates the typical fundamental-harmonic structure; the fundamental component consists of multiple fine-structured features (striae). During the decay phase of the burst, the source areas expand with time with nearly constant rates, and the area expansion rate for the fundamental component is 2~4 times higher than for the harmonic component. Such behavior is consistently observed for all well-identified striae, originating at a variety of frequencies, and is consistent with models of radio wave propagation in inhomogeneous plasmas.

Observations using the largest decameter radio telescopes have allowed us to trace the detailed time history of solar radio burst sources. It is found that intrinsically very small radio sources have an apparent size that is a thousand times larger than the actual region where the radio waves originate. Therefore, it is radio wave propagation effects (e.g. Steinberg et al, 1971, Arzner & Magun, 1999, Thejappa, & MacDowall, 2008), rather than the intrinsic properties of the emission source, that determine the observed spatial characteristics of the plasma emission radio bursts. In addition, observations with high time resolution provide a new opportunity for diagnostics of small-scale plasma fluctuations — imaging the radio source halos as the radio waves move in the solar corona.