The new generations of multiwavelength radioheliographs with high spatial resolution will employ microwave imaging spectropolarimetry to recover flare topology and plasma parameters in the flare sources and along the wave propagation paths. The recorded polarization depends on the emission mechanism and emission regime (optically thick or thin), the emitting particle properties, and propagation effects. Here, we report an unusual flare, SOL2012-07-06T01:37, whose optically thin gyrosynchrotron emission of the main source displays an apparently ordinary mode sense of polarization in contrast to the classical theory that favors the extraordinary mode. This flare produced copious nonthermal emission in hard X-rays and in high-frequency microwaves up to 80 GHz (Figure 1). 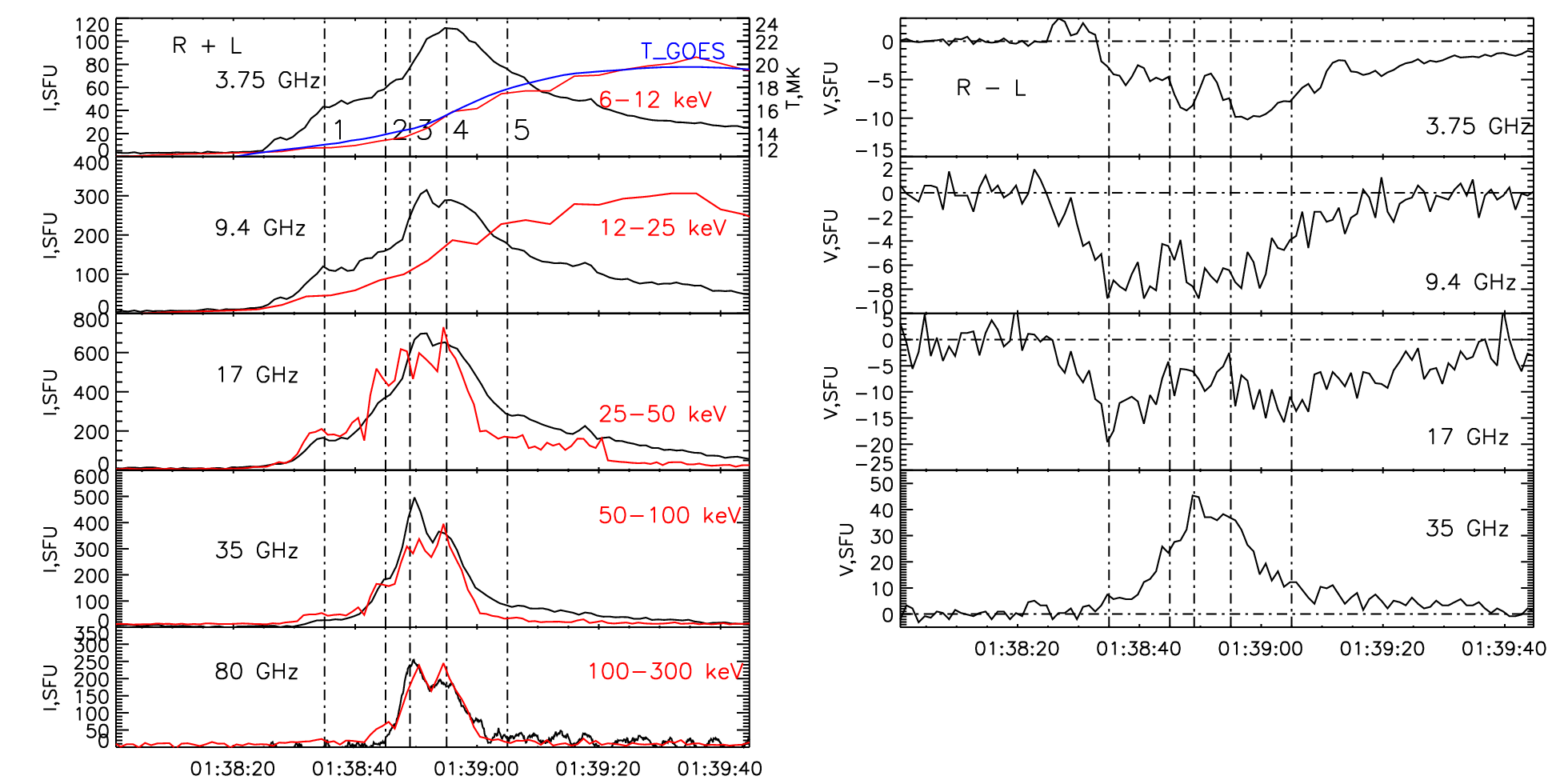 Figure 1. Lightcurves of X–ray (RHESSI, red) and microwave fluxes (NoRP, black) in intensity (R+L, left) and in polarization (R−L, right). Plasma temperature profile calculated from the GOES data are shown in the left top panel. The RHESSI data are presented in arbitrary units.

It is found that the main flare source corresponds to an interaction site of two loops with greatly different sizes (Figure 2). 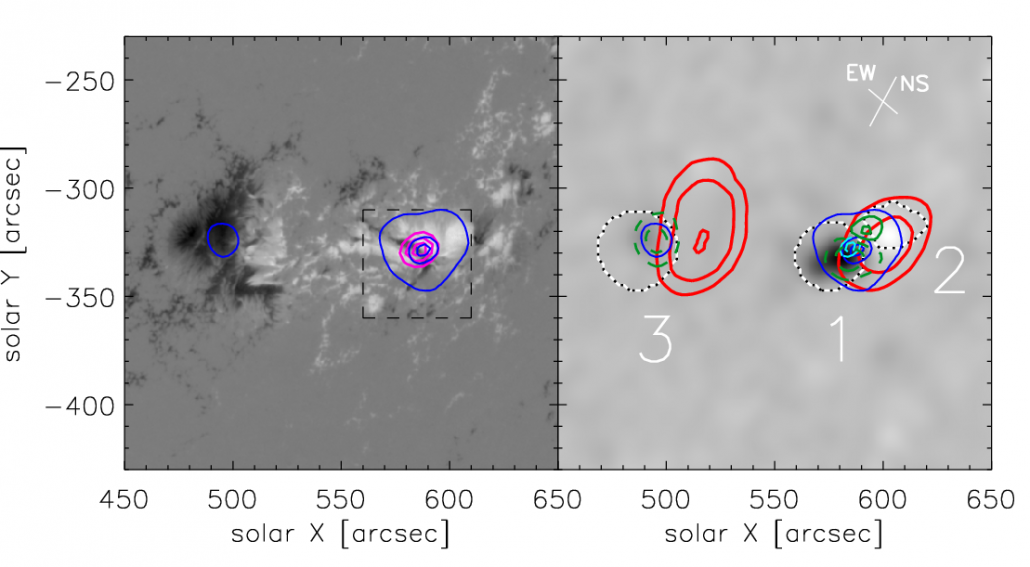 Figure 2. Flare structure. The grayscale background is a magnetogram taken at 01:39:00 UT (left panel) and an RMS polarization map at 17 GHz (right). Blue contours mark the 17 GHz sources in intensity at 01:38:48 UT. In the left panel the pink contours present the HXR brightness levels at 25–50 keV (RHESSI) relative to maximum (averaged over 01:38:49 – 01:38:54 UT). Right panel: the black–white contours bound the masks for flare sources, marked by numbers; red contours show the intensity of microwave sources at 5.7 GHz (01:41 UT), and cyan contours ­­- 34 GHz. Green contours present the 17 GHz emission in polarization at 01:38:48 UT: the dashed – LCP, and solid lines show RCP. In the top right corner the cross presents directions and beam width of the one–dimensional SSRT scans.

We have investigated the three possible known reasons of the circular polarization sense reversal – mode coupling, positron contribution, and the effect of beamed angular distribution. We excluded polarization reversal due to contribution of positrons because there was no relevant response in the X-ray emission (WIND/KONUS and RHESSI data).

We find that a beam-like electron distribution can produce the observed polarization behavior, but the source thermal density must be much higher than the estimate from to the X-ray data. We conclude that the apparent ordinary wave emission in the optically thin mode is due to radio wave propagation across the quasi-transverse (QT) layer.

The flare occurred in the central part of the solar disk, which allows reconstructing the magnetic field in the flare region using vector magnetogram data. We reconstructed the coronal magnetic field in the nonlinear force–free approximation, using an SDO/HMI vector magnetogram as input data (Rudenko and Myshyakov, 2009). The QT layer most likely exists at heights below 5 Mm where the magnetic field B > 500 G. This height is in accordance with the size of the small loop. The abnormally high transition frequency (above 35 GHz) can be achieved reasonably low in the corona where the magnetic field value is high and transverse to the line of sight. This places the microwave source below this QT layer, i.e. very low in the corona.

Spatially resolved microwave polarization observations can provide important data on flare topology and plasma parameters. We have studied the flare SOL2012-07-06T01:37 which is a good illustration of a flare initiated by the interaction of a large and a small loop. The interaction site is seen as the main flare source in X–rays and microwaves and is characterized by an unusual behavior of the polarization spectrum: the wave type changes from extraordinary mode to ordinary mode at a frequency between 17 and 35 GHz. We have identified two possible reasons for the observed reversal of polarization sense. First, it could be due to a pitch–angle anisotropy of the emitting electrons. The scenario in which the electrons are strongly beamed places the source above 5 Mm and requires a dense loop there, which is not confirmed by either X–ray or EUV data (Fleishman et al., 2016).

On the other hand the spectrum fitting shows that the polarization reversal can be explained by the transition of gyrosynchrotron emission from the optically thick to thin mode. The observed circular polarizations are opposite to the intrinsic polarizations and can be reversed by the quasi–transverse effect. The quasi-transverse (QT) scenario places the source relatively low in the corona, which releases the stringent requirements on the thermal number density and nonthermal electrons, given that the magnetic field is reasonably large there. Recently, Sadykov et al., 2016 reported a flare that occurred in a system of a low–lying loop arcade with a height of ≤ 4.5 Mm using New Solar Telescope (NST) data. Wang et al. (2017) reported a similar finding for flare precursors using a combination of NST and EOVSA data. We conclude that flares occurring in rather low–lying loops may not be unusual.