A substantial fraction of the flare energy (as observed e.g. in bolometric luminosity) first appears in non-thermal electrons and ions (Emslie et al. 2012). It implies that the particles are efficiently accelerated to a non-Maxwellian velocity distribution. Most of the non-thermal electrons have energies in the 10 – 30 keV range, but some are accelerated beyond 100 keV and radiate gyro-synchrotron radio emission. Nearly all of the flare energy is subsequently thermalized and a fraction of some 20% is finally radiated in soft X-rays (SXR). 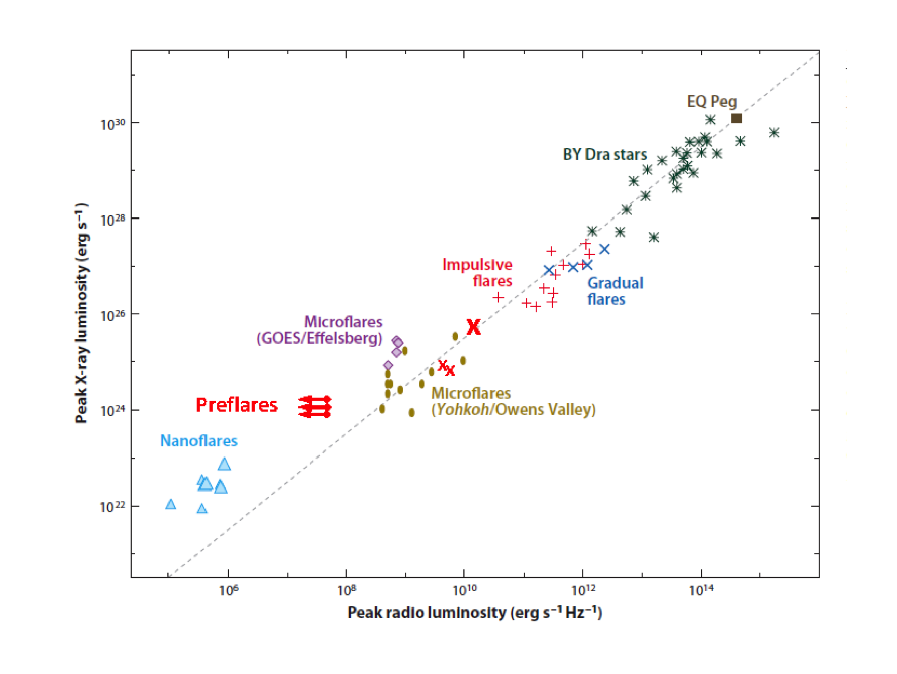 Figure 1. Comparison of flare peak SXR and 3.6 cm (gyro-synchrotron) luminosities. Upper limits derived from these preflare observations are shown by red arrows. Two peaks in the early main phase are indicated with a little red x, the main peak with a capital red X. The general relation is shown by a dashed line (from Güdel & Benz 1993; Benz & Güdel 1994; Benz et al. 2017).

We have studied the M2.5 flare SOL2011-08-09T03:52, which was preceded by a prolonged preflare phase, lasting some 20 minutes (Figure 2). RHESSI did not observe any hard X-rays during the preflare. We report here on the search for non-thermal radio emission using more sensitive Nobeyama observations. 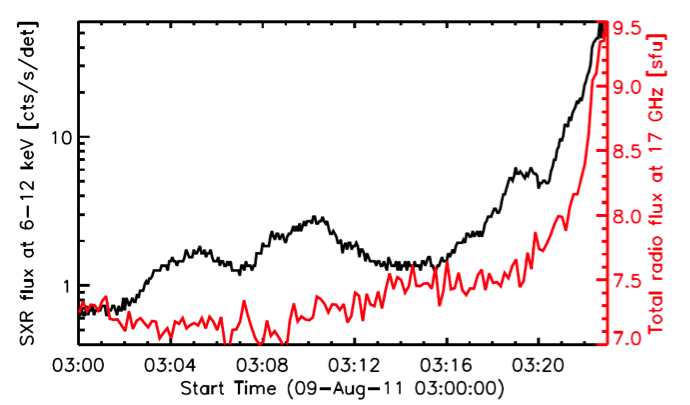 The radio flux observed in the preflare is consistent with the thermal free-free emission of the SXR emitting thermal plasma. Thus we have not detected any gyro-synchrotron radio emission associated with the three SXR peaks. The upper limits of the SXR/gyro-synchrotron ratios are shown in Figure 1. They indicate a ratio that is at least an order of magnitude larger than observed in two peaks of the early phase of the flare (03:25 and 03:31 UT) and the peak of the main flare (03:54 UT). The three preflare peaks studied are radio-poor similar to the nanoflares and some microflares reported previously (see Figure 1).

As the preflare SXR emission was found near the main flare site, the magnetic field is unlikely to be the reason for the weakness of the radio emission. The radio-poor events suggest inefficient electron acceleration to relativistic energies in the preflare phase. Gyro-synchrotron emission due to mildly relativistic electrons is particularly sensitive to such a behavior.

Feeble electron acceleration to high energies in the preflare phase complies with the spectral evolution of hard X-ray emission in regular flares, which is initially steep and flattens during the maximum. The non-thermal electron distribution typically evolves according to a soft-hard-soft pattern or, more rarely, to soft-hard-harder. Thus acceleration to high energies is less productive in the early main flare phase. Moreover, low efficiency for acceleration of relativistic electrons in preflares also concurs with the trend of small flares to have a steeper (softer) non-thermal electron distribution at 35 keV than large flares (Battaglia et al. 2005).

The new preflare observations are consistent with a scenario in which energy release in flares starts mainly with heating rather than acceleration in the preflare phase. Here heating is defined as an energization to a Maxwellian-like velocity distribution at higher temperature. Acceleration becomes the dominant energy release only in the main flare phase.

We acknowledge the use of RHESSI and Nobeyama data.