Type III bursts with an alternating drift-rate sign were observed by the radio telescopes Ukrainian T-shaped Radio telescope (UTR-2, Kharkov, Ukraine), Ukrainian Radio telescope of the Academy of Sciences (URAN-2, Poltava, Ukraine), and the Nançay Decameter Array, (NDA, Nançay, France) during the summer observation campaign in 2012. At UTR-2 only four sections of the radio telescope were used. The two Ukrainian radio telescopes were equipped with a digital spectral polarimeter of z-modiﬁcation (DSPz). They enable the recording of radio emission in the continuous frequency band 8-32 MHz/s. The frequency and time resolution of the DSPz used here were 4 kHz and 100 ms. The spectrometer that was used for these observations at NDA had a frequency of 12 kHz and time resolution of 37 ms.

We discuss in the paper (Melnik et al., 2015) three type III bursts with changing frequency drift-rate signs, which were observed on June 3, 2012, August 25, 2012 and August 26, 2012. The dynamic spectrum of one of them, namely the burst registered on August 25, is shown in Figure 1. The drift rate of its forefront was -3.6 MHz/s and 0.95 MHz/s in the frequency ranges 18-32 MHz and 11-18 MHz correspondingly. In the frequency band 21-33 MHz the drift rate of its peak changed sign several times (Figure 1b) with an average negative drift rate of about -1.7 MHz/s. At lower frequencies the drift rate also changed sign several times, but now the average drift rate is positive 1.2 MHz/s. This type III burst together with the preceding one resembles an inverted U-burst (Figure 1a). However, we consider this situation to be accidental because all observed decameter U-bursts have a descending part that is essentially fainter than the ascending one. Normal U-bursts have descending parts with positive drift rates. This means that the electron beam responsible for the descending part propagates toward the Sun. The discussed burst changes the drift-rate sign. Clearly, this needs to be explained even if this burst is considered as the descending part of a U-burst. 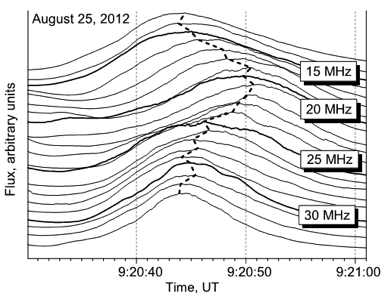 Figure 1. a) Dynamic spectrum of the type III burst with changing drift-rate sign on August 25, 2012 at 09:20:44; b) The time profiles of this type III burst at different frequencies.

Figure 2. Type III exciter propagating at an angle \(\alpha\) to the line of sight.

Then the frequency drift rate in Equation (1) is positive for

if electrons move outward from the Sun, i.e. \(dn/dr < 0\). Taking into account Equation (2), the condition in Equation (3) can be rewritten as