We developed an innovative approach by studying each Earth-directed event leading to a storm sudden commencement (SSC) in the magnetosphere during 2002 (maximum activity of Cycle 23). This unprecedented, comprehensive study consists of: i) starting from the list of 32 SSCs listed by the International Service of Geomagnetic Indices (ISGI) of the Observatory de l’Ebre, ii) linking each SSC to a CME, iii) filling in the observational gaps along the Sun–Earth chain as much as possible, and iv) identifying one or many solar sources, with a clear signature on the Sun, in a temporal window determined by considering two extreme propagation velocities (300 and 1500 km s−1). When there is no CME identified as the source of the observed SSC, we seek what process in the solar wind may have led to the SSC, with the help of observations at L1. Regarding the terrestrial consequences, where previous studies are limited to just a few magnetic indices, we also study carefully the responses of the magnetosphere–ionosphere–thermosphere system making use of a large set of varied measurements (from spacecraft operating during 2002 along the Sun–Earth line and from terrestrial stations).

The 32 SSCs are linked to 31 perturbations observed at L1 (due to the fact that two SSCs are associated with the same event). We considered four criteria which enable us to associate 28 SSCs with 44 CMEs (associated with 3 X-class, 19 M-class, and 22 C-class flares and including 21 halo CMEs) from the larger list of possible CMEs with a visible source on the Sun. The probability for an SSC to occur is 75% if the CME is a halo CME. Among the 500, or even more, front-side, non-halo CMEs recorded in 2002, only 5% could be the source of an SSC.

The solar-wind structures at L1 after the 32 SSCs are 12 magnetic clouds (MCs), 6 interplanetary coronal mass ejections (ICMEs) without an MC structure, 4 miscellaneous structures, which cannot unambiguously be classified as ICMEs, 5 corotating or stream interaction regions (CIRs/SIRs), one CIR caused two SSCs, and 4 shock events; one CIR caused two SSCs. The 11 MCs listed in 3 or more MC catalogs covering the year 2002 are associated with SSCs. For the three most intense geomagnetic storms (based on Dst minima) related to MCs, we note two sudden increases of the Dst, at the arrival of the sheath and the arrival of the MC itself (see Figure 1). 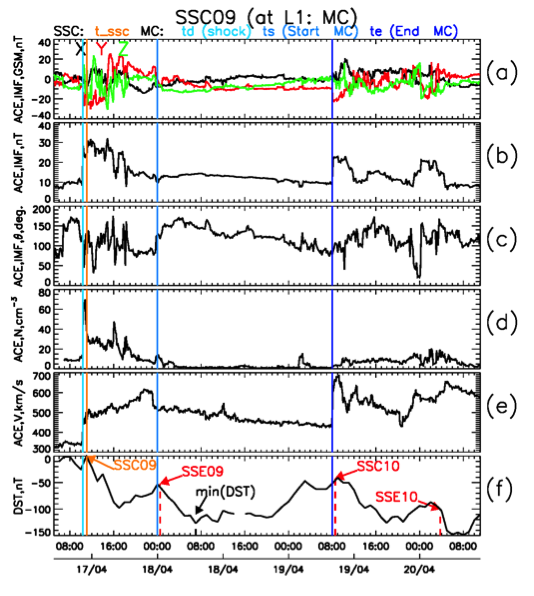 Figure 1. Observations at L1 (ACE data) of an MC together with the Dst index associated with the SSC09 of 17 April 2002. (a) The three components of the IMF in the GSM coordinate system. (b) The IMF intensity. (c) The IMF inclination with respect to the ZGSM axis. (d) and (e) The solar wind density and velocity, respectively. (f) The simultaneously observed variations of the Dst index along with the indication by dashed lines of the other SSC observed during the time window, the SSE events and the min(Dst) associated with the SSC09 event.

In terms of geoeffectiveness, the relation between the CME speed and the magnetic-storm intensity, as characterized using Dst, is very complex, but generally CMEs with velocities at the Sun larger than 1000 km s−1 have larger probabilities to trigger moderate or intense storms. The most geoeffective events are MCs, since 92% of them trigger moderate or intense storms, followed by ICMEs (33%). At best, CIRs/SIRs only cause weak storms.

We show that these geoeffective events (ICMEs or MCs) trigger an increased and combined auroral kilometric radiation (AKR) and non-thermal continuum (NTC) wave activity in the magnetosphere, an enhanced convection in the ionosphere, and a stronger response in the thermosphere. However, this trend does not appear clearly in the coupling functions, which exhibit relatively weak correlations between the solar-wind energy input and the amplitude of various geomagnetic indices, whereas the role of the southward component of the solar-wind magnetic field is confirmed. Some saturation appears for Dst values <−100<−100 nT on the integrated values of the polar and auroral indices (Figure2). 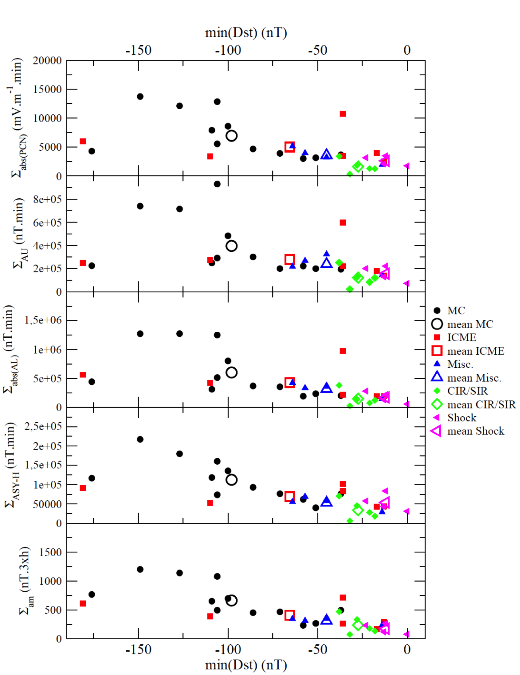 Figure 2. Minimum of Dst as a function of integrals of different indices over the event duration (from top to bottom: PCN, AU, AL, ASY-H, am).

In contrast to previous statistical or case studies, the starting point is neither the coronal mass ejection (CME) emission at the Sun, nor the value of the min(Dst) index used to evaluate the intensity of the geomagnetic storm, but the storm sudden commencements (SSCs). This study then aims first to associate an SSC with a possible source at the Sun, and then to characterize the propagation of the solar event along the entire chain from the Sun to the Earth. Our analysis underlines the importance of joint white-light and multi-wavelength-radio observations, in particular of the radio imagery, for revealing and explaining the complex interactions between different CMEs or between a CME and the ambient medium. The results demonstrate the need for a reliable propagation tool to properly relate an ICME observed at L1 and a CME detected within the five days preceding its arrival at L1.