Discussion about the nature of zebra-structure (ZS) in type IV radio bursts continues, despite the ten proposed models. First of all, this is due to the wide variety of stripes in each new phenomenon, making the explanation of all the fine details by any one mechanism becomes impossible. The most widespread explanation is the emission at different levels of double plasma resonance (DPR), sequential on the height surfaces in the magnetic trap, where the upper hybrid frequency ($\omega_{UH}$) becomes equal to the integer of electronic cyclotron harmonics $s\omega_{Be}$: $\omega_{UH} = (\omega_{Pe}^2 + \omega_{Be}^2)^{1/2} = s\omega_{Be}$ (Zheleznyakov, Zlotnik, 1975; Winglee, Dulk, 1986; Kuznetsov & Tsap (2007) ). An important alternative mechanism is the interaction of plasma waves with whistlers waves: $l + w \Rightarrow t$ (Chernov, 1976; 2006). Here, we will show the possibility of explaining the main features of zebra stripes in the model with whistlers, using the example of the phenomenon on August 1, 2010.

A number of authors continue to improve mechanisms based on the DPR model. Karlicky and Yasnov (2015), showed that ZS can be excited within the framework of the DPR in the transition layer only in a narrow height interval (model Selhost et al. 2008, A&A, 488,1079). Under such conditions it becomes clear that the DPR mechanism cannot provide a large number of zebra stripes. In the recent work of Benáček, Karlicky, Yasnov (2017), new calculations of the increments of the upper hybrid waves under DPR conditions with a ring distribution of high-speed electrons with relativistic corrections for different background plasma temperatures and fast particles and for optimal wave numbers were carried out. It was shown that the explicit maximum of the increment is obtained only for electron velocities of 0.1 c with a narrow dispersion (for the speed ~ 0.2 c the increment sharply decreases and the maxima are washed out in the continuum for several cyclotron harmonics s). Thus these calculations show the inefficiency of the DPR mechanism. It is also important to note that the zebra stripes in this case still reveal the superfine structure of millisecond duration.

The August 1, 2010 event is an obvious case to understand all the difficulties in explaining the complex structure of the zebra pattern. Figure 1 gives dynamic spectrum in the decimeter range of Yunan observatory during the first maximum of this phenomenon. The event was discussed in connection with two complex CMEs. Separate spectra of Ondřejov observatory were used by Marian Karlicky and co-authors in several works under the DPR model, but no one tried to adequately explain the diversity of ZS in this case (see Figure 1).

Figure 1. Zebra- structure in the pulsating regime in the event on August 1, 2010 in the decimeter range 1000 – 1500 MHz observed by the spectropolarimeter of Yunan observatory (YNAO,   Kunming, China). The radio emission is weakly polarized. (Courtesy Guannan Gao). 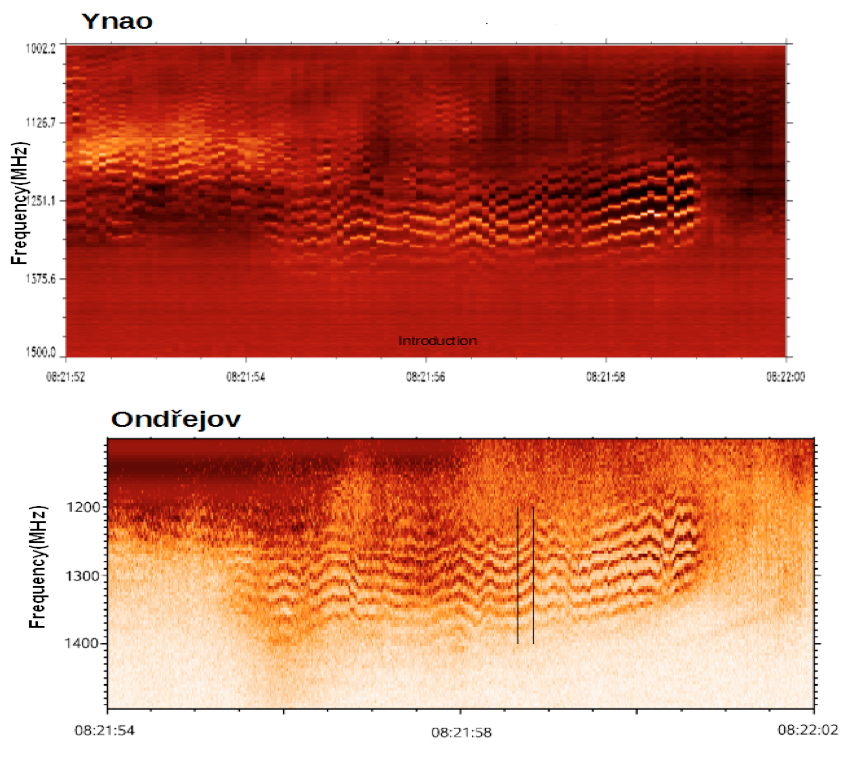 Figure 2. An enlarged fragment of the spectrum shown in Figure 1, of 8 s duration, compared with the spectrum of Ondřejov observatory. All the components of the stripes coincide in two observatories, divided into 8000 km that confirms the solar origin of ZS (the time scale of obs. Ynao is late on 1.6 s). The time resolution of the spectrum of Ondřejov is an order of magnitude higher, and we see therein the superfine structure of the stripes of millisecond duration (Ondřejov spectrum is courtesy Marian Karlicky). 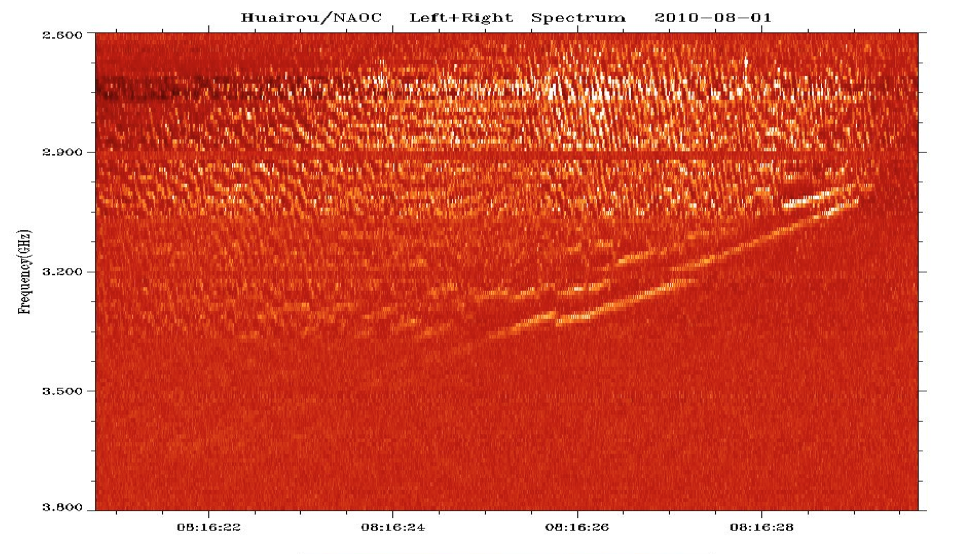 So, any model should explain:

In other events we have observed many examples of frequency splitting of ZS and, perhaps this was the main property, there was a synchronous change in the frequency drift of ZS stripes with space drift of their radio source.

In the DPR model all the changes of ZS stripes are usually associated with changes of the magnetic field and with propagating fast magneto-acoustic waves. In a very complicated case the simultaneous presence of fast particles in a radio source with several different distribution functions was proposed (Zheleznyakov et al. 2016).

At the same time, in the whistler model all the aforementioned properties of ZS stripes mentioned above were explained by real physical processes occurring during the coalescence of Langmuir waves with whistler waves (Chernov, 2006).

For a comprehensive discussion of comparative analysis of observations of ZS and fiber bursts and different theoretical models we refer the reader to the reviews of Chernov (2012; 2016) (freely available at http://www.izmiran.ru/~gchernov/).

The authors are grateful to the Chinese colleagues in the National Astronomical Observatories of China Chenming Tan and Guannan Gao. The work was supported by the Russian Foundation for Basic Research (Grant N 17-02-00308).