Flares and coronal mass ejections (CMEs) are thought to result from magnetic energy release in the solar corona, often involving the destabilisation of a twisted magnetic structure known as a flux rope (Chen et al. 2011, Webb et al. 2012). This activity may be accompanied by the acceleration of electrons (Kahler 2007, Lin et al. 2011). However, there is ongoing debate on exactly where, when and how this particle acceleration occurs during flaring and eruption. Observing the locations of energetic electrons during an eruptive event may help confirm how the electrons are accelerated, how the eruption proceeds, and also help in identifying which models of solar eruptive activity are correct.

In this study, we examine an eruptive event from 2014-April-18 using the Atmospheric Imaging Assembley (AIA) and attempt to identify the sites of electron acceleration in association with the erupting flux rope using radio imaging from the Nancay Radioheliograph (NRH) combined with metric and decimetric radio spectrography. We show strong observational evidence of energised electrons produced from an eruptive mechanism which closely resembles a tether-cutting or flux cancelation model. This is followed by electron acceleration from reconnection above the erupting structure in the surrounding magnetic environment. Sites of electron acceleration are then both associated with the flare and driven by the erupting structure itself in a moving type IV-like mechanism. We also show how electrons then fill the erupting volume, making visible at radio wavelengths the legs of the associated coronal mass ejection (CME). In total, we reveal in unprecedented detail the sites and kinds of electron acceleration occurring throughout this event, from eruption initiation to propagation of the associated CME into the corona.

The 2014-April-18 event was associated with a sigmoid on the western hemisphere of the sun, observed using the the hottest channels of AIA (94, 131, 335 Angstroms), see Figure 1. For this same event, the studies of Joshi et al.  (2015) and Cheng et al.  (2015) provide evidence that this structure is a flux rope undergoing tether-cutting style reconnection as it develops, hours before eruption. In our study, we concentrate on 12:00 UT onwards, when the flux rope has already been formed and poised for eruption.

The event begins with a small C-class flare at 12:35 UT, observed by GOES soft and hard X-ray light curves, which is accompanied by a type III burst observed by the Nançay Decametric Array (NDA) and the Orfées spectrograph (Figure 2). At the time of this initial C-class flare and type III, we see plasma jet at the center of the sigmoid, while radio imaging reveals that the electron beam causing the initial type III originated at the site of this jet, see Figure 1. This shows that the center of this sigmoid was subject to a possible reconnection event during eruption initiation, resulting in the expulsion of plasma and acceleration of 75 keV electrons (deduced from type III drift rate). After this initiating reconnection event, the sigmoid begins to accelerate (see Carley et al. 2016). 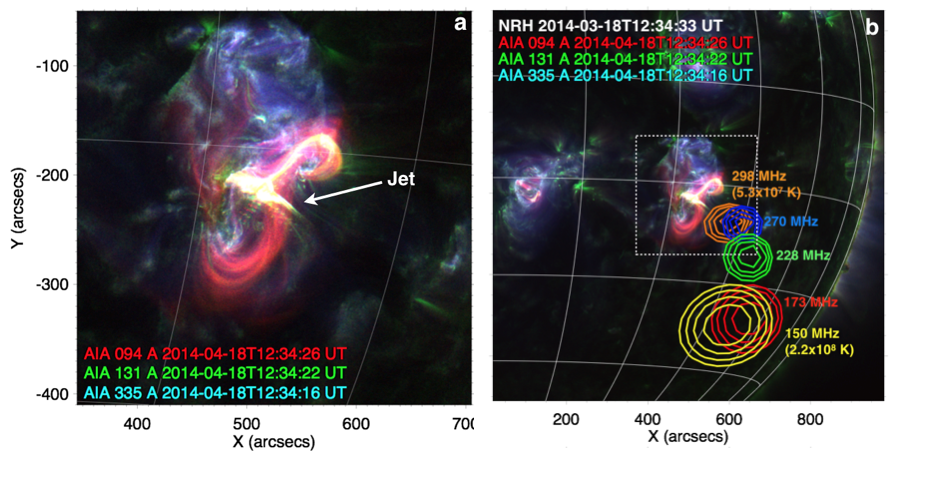 Figure 1. (a) AIA three colour image of 94, 131, 335 Angstrom channels showing a sigmoid structure with a jet (indicated by the arrow) occurring at its center. (b) Same image as (a) but with a wider field of view and NRH contours from 298-150MHz over-plotted and maximum and minimum brightness temperature indicated on the corresponding frequency. The sources occur at the same time as the type III group at 12:34:30UT (indicated in Figure 2 below). 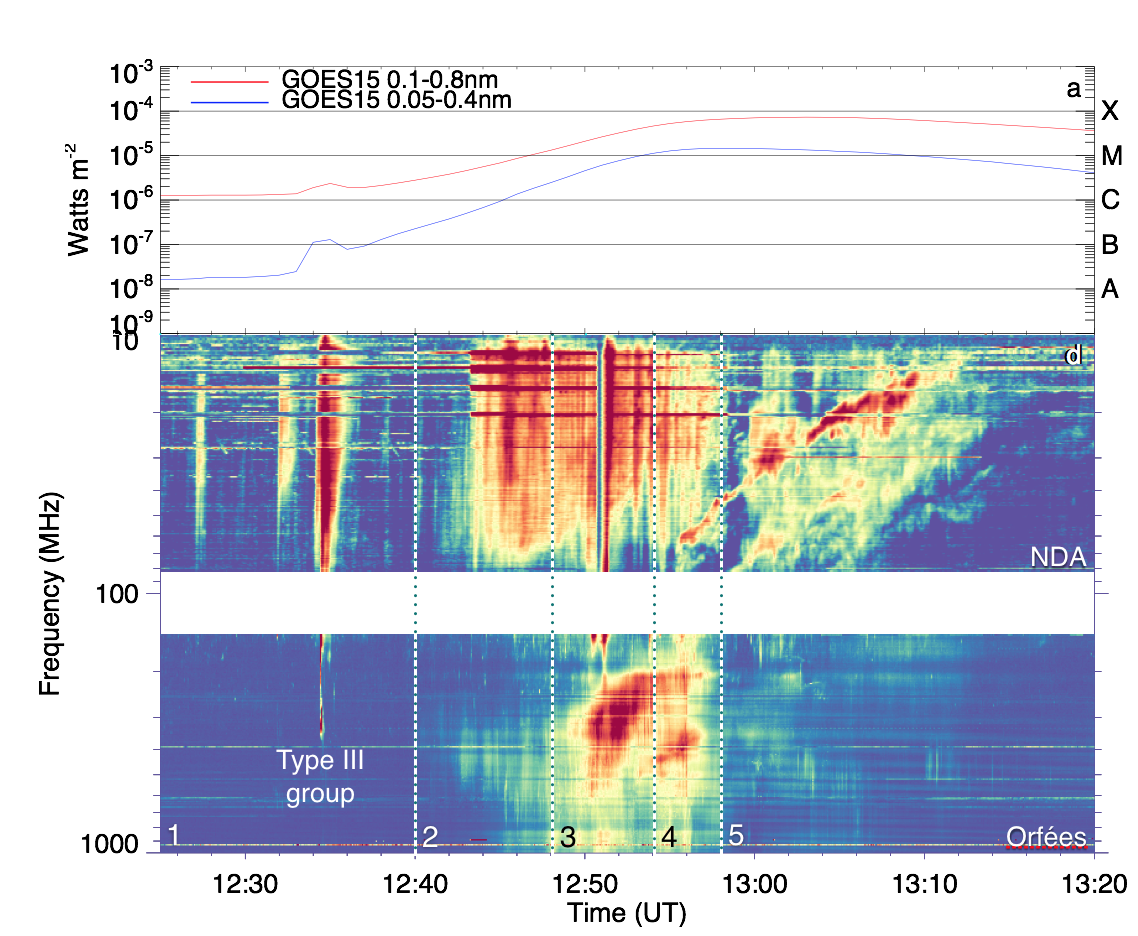 We next turn our attention to the flare peak and the radio burst at ~12:50 UT observed to start during period 3 in the Orfées dynamic spectrum, shown in Figure 2.  The figure shows the burst is broadband, covering  ~200–600 MHz. Throughout the lifetime of this burst we observe radio sources to be located both at the active region flare site and also above the flux rope north-west loop (looptop or ‘LT’ source), see Figure 3. Over a period of ~7 minutes this looptop radio source is driven into the corona above the NW loop at ~400 km/s. Such a mechanism is reminiscent of the flare continuum and related moving type IV mechanism as observed in Pick et al. (2005), for example. It is indicative of a stationary site of energetic electrons located at the active region and also a moving site of energetic electrons driven by the NW loop of the flux rope as it erupts into the corona.

Figure 3. (left) The active region and looptop sources during the flare peak at 12:50 UT (period 3 in spectrograph in figure 2). (right) Motion of the looptop source through frequency and time, indicating the driving of a site of energetic electrons at 400 km/s above the NW loop of the flux rope.

Development of the CME

In the final stages of the event, starting at 12:58UT in period 5 dynamic spectrum, the radio bursts in Orfées become weaker. After this time it is no longer possible to image the flux rope loops with AIA, however we may still observe where the sites of energetic electrons are located with respect to the CME as it develops into the LASCO field of view.  Figure 4 (left) shows images of the radio sources using three NRH frequencies at 150, 173, 228 MHz. These images were made by applying the three-colour imaging technique to the NRH radio images. We assign one NRH frequency to one colour in an RGB image, allowing us to image three NRH frequencies simultaneously. In this way, spatially coherent regions of intensity are imaged as white, while an excess in intensity of any one (or two) of the NRH frequencies is imaged as a primary colour (or combination of primaries), much the same as the EUV imaging three color technique.  This shows that at 150, 173, 228 MHz the radio sources are contained by a roughly circular region in the plane of sky that we call the `radio bubble’. This is probably due to radio emission of energetic electrons localized in an erupting volume which contains the flux rope.  After  13:00UT the radio sources observed by NRH begin to assemble into two segments (labelled S1 and S2, Figure 4 right), with increasing frequencies towards to the solar surface in. The radio contours are overlaid on a 174 Angstrom EUV image from the Sun Watcher using Active Pixel (SWAP) instrument on board the Project for Onboard Astronomy 2 (PROBA2) spacecraft and Large Angle Spectroscopic Coronagraph (LASCO) C2 instrument on board the Solar and Heliospheric Observatory (SOHO). The white line shows a back-extrapolation of the CME front to the time of the radio image, showing the front has a good spatial relationship with the two segments of radio emission. This provides evidence that these radio sources delineate the lower sections of the CME, possibly tracing the magnetic roots or ‘legs’ of the flux rope, similar in observation to Huang et al. (2011) and Maia et al. (1999). 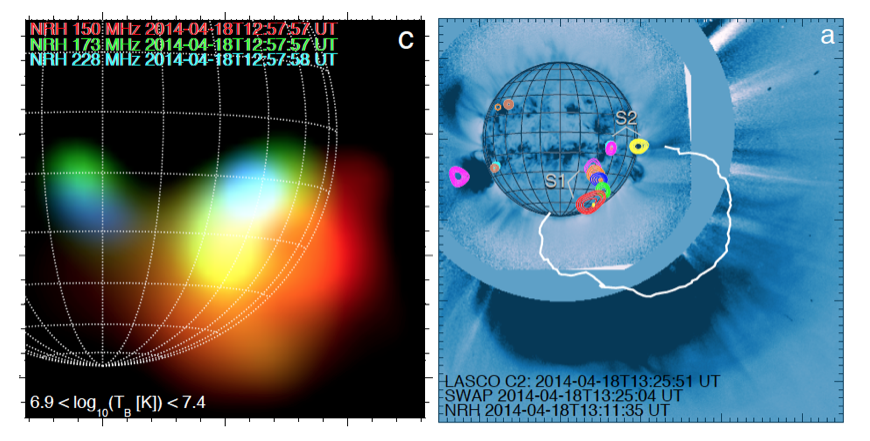 Figure 4. (left) NRH three-colour image of 150, 173, 228 MHz, showing the energetic electrons are contained in a roughly circular region on the plane of sky. (right) Combination of SWAP 174A , NRH contours from 150-445 MHz, and LASCO C2 image of the CME. The NRH contours are grouped into two segments `S1′ and `S2′. The white line represents the back-extrapolation of the CME front using a speed of 1100 km/s and a propagation time of 14 minutes (time difference between NRH image and LASCO C2 image). The back-extrapolated front and NRH contours show a good spatial correspondence.

In this study, we have presented analysis of radio sources which indicate the regions of accelerated electrons at each stage of a flare and flux rope eruption, from its initiation to its propagation into the corona and development in a CME. While the flux rope was observed in AIA, the sites of electron acceleration were identified using multiple radio frequency images of the NRH. This combined with high-time and frequency resolution dynamic spectral observations from Nançay’s new Orfées instrument allowed us to identify when and where the electron acceleration took place during the event.