The following text is extracted from the IOP Report: UK Plasma Visions.

What is a plasma?

A plasma is a gas in which some or all of the atomic or molecular constituents have been ionized by losing at least one electron. The plasma is therefore an ensemble of neutral and charged species in which the latter constitutes a significant contribution to the global properties of the gas by virtue of their collective electromagnetic character and altered transport properties.

As an example of how the collective properties of a plasma are different from the original gas of neutral particles, consider how the presence of the charged particles (positive ions, free electrons and negative ions) allows electrical conduction currents to be carried in a plasma: the neutral gas precursor would not be able to support such currents. Not only does this mean that the electrical characteristics of the plasma are different from the original neutral gas, but also that other physico-chemical properties are changed too: for instance, the thermal conductivity is improved by the presence of light, mobile particles (the electrons) that can transmit energy more effectively than the original heavier atoms or molecules.  In fact, the mobile electrons contribute significantly to almost all changes in the property of the plasma compared to the original neutral gas: non-thermal energy transport; Coulomb charging of surfaces exposed to the plasma; excitation (without ionization) of neutral atoms or molecules leading to light emission or metastable formation; and the stimulation and evolution of waves and instabilities in the global ensemble; and additional ionizing collisions.Such properties can be exhibited with as little as 1 part in 108 of the neutral gas ionized. However in fusion plasmas, the presence of neutrals is less significant and such plasmas require total ionization in the fusion-burning region.

Low temperature plasmas are those in which the mean energy of the most energetic species (usually the electrons) is less than that required to ensure that all species are ionized (at least to the first ionization state). Low temperature plasmas are usually those in which neutral species (that is, atoms or molecules which have not been ionized) continue to play a significant role in energy exchange or transport of the charged species, via collisions between the plasma components (the electrons and ions) and the neutral gas molecules or atoms.  Such collisional plasmas have diverse technological applications in terrestrial contexts, such as energy-saving lighting, semiconductor etching in the microprocessor industry,  surface functionalisation (that is, modifying surfaces in order that they have specific properties such as being hydrophobic or biocidal or diamond-like), surface coating (such as depositing a polymer layer for a specialised application) and radical production (that is, the creation of chemically reactive species by electron-moderated physics). An exciting new emerging field of low temperature plasmas is the plasma-life sciences interface, including plasma medicine, where plasmas directly and indirectly (through the plasma-neutral gas interaction) can influence living cells either by enhancing or inhibiting their development. 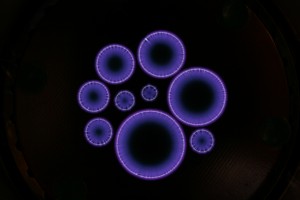 Many astrophysical plasmas are low-temperature in the sense discussed here: for example, the solar photosphere (the visible surface of the sun) is poorly ionised because the ambient temperature (5,800 K) does not furnish sufficient energy to ensure that all the neutral gas is converted to free electrons and ions (mostly protons in the sun). Low temperature plasmas are also found in fusion energy: for example, where the cooler exhaust plasma interacts with wall materials, or where negative ion sources are used to create neutral beams for additional fusion heating.

Low temperature plasmas then can be primarily defined by the interactions between the neutral and charged species. 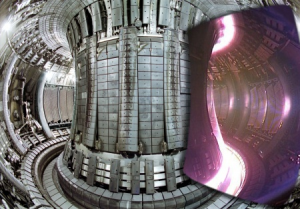 Composite image showing an interior view of the JET vacuum vessel, with a superimposed image of an actual JET plasma taken with a visible light camera. Only the cold edges of the plasma can be seen, since the centre is so hot that it radiates only in the ultra-violet part of the spectrum.© EFDA-JET

In a high temperature plasma, the mean energy per particle is sufficient to ensure that the vast majority of the atoms and molecules are broken up into ions and free electrons. The consequence is that the bulk properties of the medium, such as thermal and electrical conductivities, have virtually no overlap with those of the original neutral gas, and are overwhelmingly dominated by the electromagnetic character of the charged constituents. Hence the key concept here is that the medium is overwhelmingly a gas of free charges, with the consequence that the collective electromagnetic character of the plasma dominates over the nearest-neighbour interactions of the conventional neutral gas. Such energetic plasmas can be created transiently on earth by the deposition of very large amounts of energy into a neutral gas or solid;  one technique uses focused laser light, causing the surface to ablate into neutral particles which are then ionized by the energy field.  Where a fully-ionised high temperature plasma is to be sustained in the laboratory, it is usually confined by magnetic fields, since the energetic particles in the plasma will damage material walls on contact. There is still usually a vacuum vessel surrounding such plasmas, since they are rarely at atmospheric pressure.