Google Earth fans can get an overlay here.

The original building (the Macfarlane Observatory, Fig 1) was situated in the former University grounds in the High Street adjoining the Physic Garden. Alexander Macfarlane, a merchant in Jamaica, had bequeathed his collection of astronomical instruments to the University. These were shipped to Glasgow and put into working order by James Watt, then at the start of his career as instrument maker to the University. An Observatory was built to house them. The foundation stone was laid on 17 August 1757 by the Professors accompanied by the Magistrates. Described as a quaint and picturesque building, it had a frontage of sixty feet. A plan appears on page 261 of "Memories of the Old College" by David Murray but there does not appear to be any extant illustration of the building itself. The equipment was added to from time to time and at one stage there was a telescope by William Herschel. The building of this first Observatory was the cue for the appointment in 1760 of the first Professor of Practical Astronomy, Alexander Wilson (of sunspot fame).

During the early years of the 19th century the surroundings of the Observatory greatly altered. The volume of smoke increased and many tall buildings were erected, so that the usefulness of the site was diminished. The observatory was for a time within the British Rail yards at College Street station but the area is now covered by modern flats. 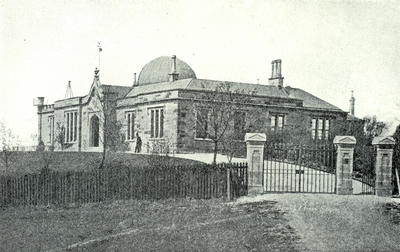 By 1836, after a series of exciting lectures by John Pringle Nichol, public enthusiasm was such that The Astronomical Institution of Glasgow was founded and the intention was to raise money by subscription for the erection of a new Observatory. A Treasury grant was also obtained and a site was obtained on Horselethill. The precaution was taken of obtaining a guarantee from the owners of the surrounding land that tall buildings would not be erected in the vicinity of the Observatory. The building was duly completed and Professor Nichol was appointed Observer in April 1841. About this time the Institution ran into financial difficulties and in 1843 the University agreed to take over the Observatory and pay off the debts. In 1845 the transaction was completed and the instruments in the old Observatory were transferred to Horselethill. An illustration of this building will be found in the book already referred to above and in other works such as the Official Guide to Glasgow, 1905.

One of the key operations of the Observatory was a contract to provide the City with accurate time and to supply the Yorkhill Quay with a one o'clock time signal for the mariners to allow checking of their chronometers before leaving the Clyde. This was done by running a local clock within the Observatory from the passage of stars across the meridian and transmitting the daily signal along underground cable to the docks. For this purpose the Observatory developed its own catalogue of stars with accurate positions, the list becoming famous as the Glasgow Star Catalogue (1883). [Catalogue of 6415 Stars for the Epoch 1870 deduced from Observations made at Glasgow University Observatory during the years 1860-1881 -- R. Grant].

A study of city maps between 1860 and the 1920s will reveal the expansion of new building as Glasgow grew westwards and once again this Observatory was found to be unsuitable. It was sold just before the Second World War by which time many of the instruments were out of date. The site is now occupied by a school.

A new Observatory was erected in University Gardens and opened in 1939 by Sir Arthur Eddington, O.M. The main equipment was a 7-inch telescope and a transit instrument. Here again, tall buildings in the vicinity of the main campus rendered the site inoperative. The Queen Margaret Union now occupies the site.

A fourth Observatory was established in the University's Garscube Estate (Acre Road) and was inaugurated in 1969 by Professor Bruck, Astronomer Royal for Scotland. A Grubb-Parsons 20-inch (0.5m) telescope was installed but this has since been removed to a site on the Cochno Estate in the Kilpatrick Hills at an elevation of 150m (500 ft). The current Observatory and its extension at Cochno is mainly used for undergraduate teaching. The instrumentation at Acre Road comprises 16, 12 and 10-inch Meade telescopes, the old transit telescope, radio telescopes (including a 21cm line spectrometer), satellite receiver dishes, a small planetarium (Goto Eros 5) and a number of laboratories with bench optics, portable telescopes and computing equipment.

For further details, see this illuminating article by Archie Roy.